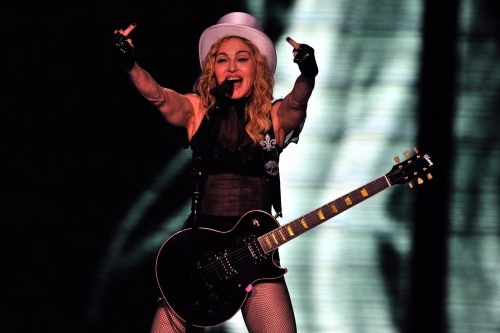 Madonna in one of her more provocative moments during her concert in Sofia. Photo by BGNES

Madonna allegedly collapsed twice on stage during her Saturday concert in the Bulgarian capital Sofia, according to UK media reports.

The UK Sun newspaper reported Wednesday that Madonna passed out twice during Saturday's Sticky & Sweet show in Sofia. They even provide video evidence from the show.

Madonna allegedly lost consciousness singing Holiday and had to be held up by a dancer and as she left the stage during Spanish Lesson, she passed out again and fell over.

The Sun quotes a source saying that Madonna was really worried backstage and had to take a long break between songs. She was apparently suffering from exhaustion.

Madonna rocked the Bulgarian capital Sofia Saturday night from 10 pm until 12 am in her first ever concert in Bulgaria.

Some 60 000 fans filled the Vasil Levski Stadium in downtown Sofia in what is the largest musical event of its kind to ever take place on Bulgarian soil.

Click here to see The Sun video of Madonna collapsing