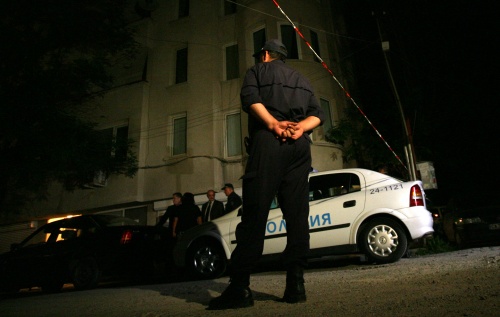 A prisoner who killed the mother of his two children in Sofia over the weekend was caught by the police. Photo by BGNES

The Sofia police have caught the murderer of the young woman, whose body was found with numerous stab wounds on Sunday in the North Park of the Bulgarian capital.

The perpetrator, Todor Perakliev, 31, is the man with whom the victim Stefka Stoyanova, 27, was living out of wedlock; they have two children together.

Perakliev is currently serving a sentence in the Kazichene Prison in Sofia; he was off for the weekend when he murdered his girlfriend. His criminal record starts in 2002, when he was arrested for robbery. In 2006, he was arrested for starting a fight in the public transport, and in 2008 - for stealing a mobile phone.

His present sentence is of 10 months, and he received after he attempted to escape from the Kazichene prison while serving his previous sentence.

According to the Psychology Institute at the Interior Ministry, Perakliev has killed his girlfriend because he was jealous. After the two of them met Saturday night, Stoyanova admitted she cheated on him four times while he was in prison.

In his own words, Perakliev first started beating his girlfriend and then tried to choke her, and eventually stabbed her to death with a kitchen knife that he was carrying with him.

After the murder, he did not return to the prison in Kazichene, and was detained by the police and taken to the Central Sofia Prison where the investigators found him as they managed to identify the victim.

After he became suspect for the murder, the police found Stoyanova's mobile phone and purse in his parents' house. Perakliev also pointed to the police the spot where he threw the knife he used - not far from the site in the North Park where the stabbed body was discovered.