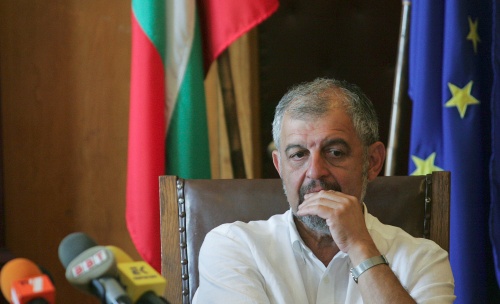 The President of Sofia University, Ivan Ilchev, announcing Monday the introduction of video cameras in the main university building. Photo by BGNES

Sofia University St. Kliment of Ohrid, which is known as the top university in Bulgaria, cannot find enough applicants to fill all of its spots.

After the end of the third round of the application campaign for the class of 2013, 865 spots are still open at Sofia University, which is 60 spots more than in 2008.

The unwanted spots are in the following majors: education (pedagogy), chemistry, physics, music, art, Russian, and German. The most attractive majors at Sofia University for this year's applicants were psychology, political science, law, tourism, and medicine.

The university leadership is now considering ways to announce additional admission rounds in order to fill all spots.
On Monday, the President of Sofia University, Professor Ivan Ilchev, also announced that the university was introducing video cameras in its main building in order to restrict unauthorized access.