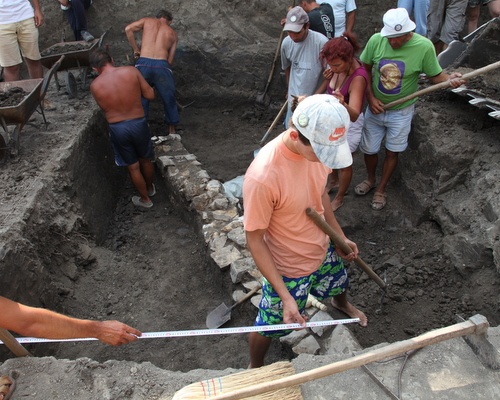 Dimitrova's team is taking part in the excavations Archeology Summer "Sliven 2009", which began on June 9. Photo by BGNES

Bulgarian archeologists have found late Monday two golden rings in the mound near the South-East village of Krushare, in the Sliven Region.

The news was reported for Darik radio by the Director of the Sliven Regional Historic Museum, Georgi Kyupchukov.

The discovery was made by the TEMP expedition led by archeologist Diana Dimitrova, wife of the late Georgi Kitov, one of the most prominent Bulgarian archeologists.

Until that moment, numerous objects have been discovered in the mound - a Thracian tomb, dating from the Roman Empire period - a unique golden wreath, a bronze candlestick, a glass rhyton, a huge bronze amphora, a golden bracelet, other golden objects, and glass vessels with some kind of liquid in them.

The excavations continue and more finds are expected to be discovered. All will be displayed at the Sliven museum where there are already 450 items, according to Kyupchukov.

Dimitrova's team is taking part in the excavations Archeology Summer "Sliven 2009", which began on June 9.

This is the third year in a row when the Sliven Municipality financially supports the "TEMP" expedition, which was Georgi Kitov's expedition.