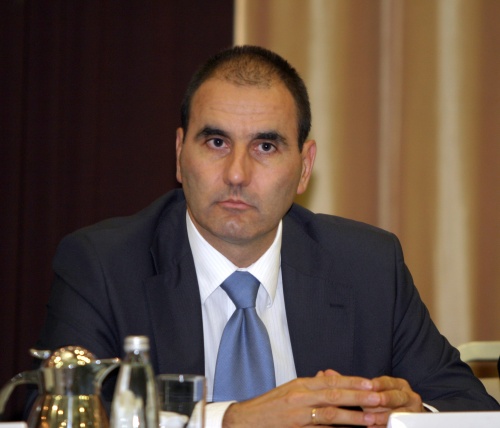 The formal leader of GERB, Tsvetan Tsvetanov, firmly denied rumors that he has been attempting to create his own party within GERB.

Tsvetanov, who in addition of being the Chair of the Citizens for European Development of Bulgaria (GERB) party, is also Bulgaria's Deputy Prime Minister (PM) and Interior Minister, spoke Monday morning in an interview for the Nova Televizia TV channel.

Tsvetanov said that only people, who have not been aware of the deep trust that existed between him and the informal leader of GERB and PM, Boyko Borisov, could be spreading such rumors.

When asked if the success of GERB could be attributed to his own work or to Borisov's charisma, Tsvetanov admitted that the PM has been the main moving force behind everything the party achieved in the last several years.

On other topics, Tsvetanov promised to stand behind the policemen, who received jail sentences over beating to death Angle Dimitrov aka Chorata, but stated he was not going to contest the court's decision. The new Interior Minister explained the action against Chorata went according to a preliminary approved plan, adding only two of the five policemen were with Chorata at the time of his death. He recommended that the media talks to the families of the deceased and those of the policemen.

Tsvetanov also explained that the introduction of live cartridges for policemen was going to be discussed with NGOs and the police trade unions and if the proposal was approved it would be legally endorsed by the end of the year.

The Minister further spoke about plans to create municipal police teams to be financed only by local municipalities, the need to increase video cameras on the roads in order to reduce traffic violations and accidents, the current debt of the Interior ministry amounting to BGN 17 M and the BGN 14 M owed to the Ministry by the State Railroad Company BDZ.

The Deputy PM said that 53,000 police men have been discharged by his predecessor, Mihail Mikov, adding that no new dismissals were planned. Tsvetanov qualified the dismissal of 200 border police employees as unacceptable because Bulgaria as a member of the EU needs to protect its borders and said this decision of the former Interior Minister was going to be further "analyzed."

Tsvetanov declined to state the number of the active organized crime groups in the country, but pointed out they were more than 5 as another former Interior Minister, before Mikov - Rumen Petkov claimed.

The Deputy PM said that organized crime, household theft and drug distribution among minors remained serious challenges for the police, but explained that his first task was to clean "his own house" of corruption and than undertake the serious combat against criminals in the country.

The 3rd anniversary of Tsvetanov as Chair of GERB expires in November when it will be decided who the new party leader is going to be, but Tsvetanov admitted that Boyko Borisov will take the post.

At 2 pm Monday PM Borisov will officially introduce the new Deputy Interior Ministers and the General Secretary of the Interior.