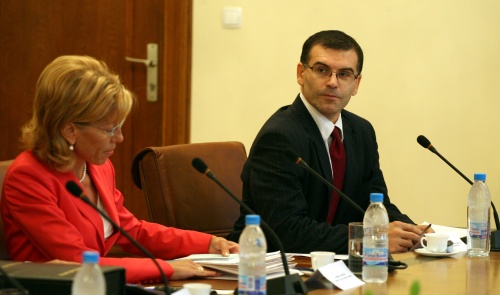 Foreign Minister Jeleva (left) and Finance Minister Djankov will be part of the new cabinet council to control absorption of EU funding. Photo by BGNES

Bulgaria's Cabinet decided Wednesday to create a new specialized structure which is going to be in charge of the management and absorption of EU funds.

The new organ will include the two Deputy Prime Ministers - Finance Minister Simeon Djankov and Interior Minister Tsvetan Tsvetanov, plus all other Ministers whose institutions absorb EU money, and the Foreign Minister Rumiana Jeleva.

Djankov announced Wednesday that his Ministry was going to set up a special Secretariat to be in charge of controlling the spending of EU funds.

The Director of the European Institute, a Sofia-based NGO support by the Open Society Institute, Juliana Nikolova, has been offered the position of head of the new Secretariat.

In the spring of 2008, the government of Sergey Stanishev appointed a special Deputy Prime Minister, Meglena Plugchieva, who was in charge of monitoring EU funds absorption.