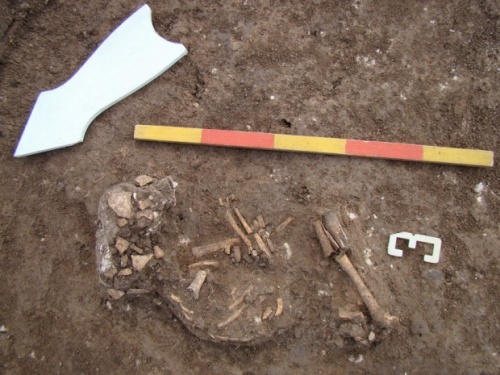 One of the three prehistoric graves uncovered near Ruse. Photo by Ruse Regional History Museum

A team of Bulgarian archaeologists has discovered a new prehistoric necropolis in the northeast part of the country.

The necropolis is located near the village of Kosharna, Ruse District, on an area of 200 square meters.

The team of archaeologists, which included Dimitar Chernakov from the Ruse Regional History Museum and Yavor Boyadzhiev from the National Archaeology Institute and Museum, found three graves of an adult and two children.

The three people are buried in a bent position. A burned down building date back to the Stone-Copper Age that was most likely used for burial rituals has been discovered near the graves.

The archaeologists have found intact ceramic vessels and stones for grinding grain as well as 24 flint segments, parts of bracelets made of the shell of the Mediterranean mussel Spondylus, and a shell of a river mussel. The researchers believe these objects were part of a set for making decorations.

The newly found necropolis near Ruse is the eighth of its kind that has been discovered in Bulgaria. Another of its unique features is a pit in the middle of the necropolis where the archaeologists found dog skeletons. The researchers think that the pit was part of the burial complex and was used for sacrifice. They point out that this is the first proof ever of dogs being used as sacrificial animals in the Stone-Copper Age.