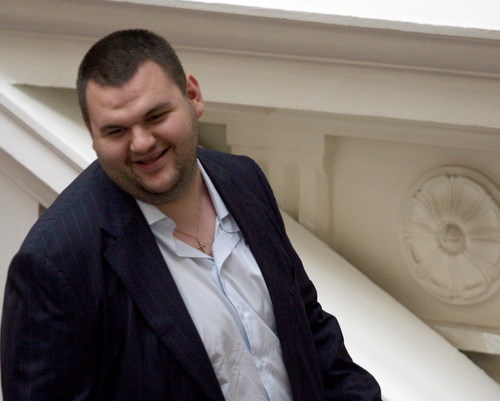 Delyan Peevski, son of controversial media mogul and former lottery head Irena Krasteva, entered Bulgaria's parliament after his successful performance in the general elections on July 5 on the ticket of the ethnic Turkish party. Photo by BGNES

A former Bulgarian deputy minister and current member of parliament from the ethnic Turkish party, who has had a most scandalous and corruption-tainted career, has been pointed out as the country's back seat ruler.

"It is a paradox and a sad fact that some of the councilors were the actual decision-makers during the term of the previous Socialist-led government," Vessela Lecheva, former head of the youth and sports agency and member of the Bulgarian Socialist Party told Trud daily.

"It is not easy for me to admit that Delyan Peevski and Rossen Karadimov governed Bulgaria towards the end of the term of our government," she said, referring to the former deputy disaster management minister and a councilor of the head of government Stanishev.

Former Socialist Prime Minister Sergey Stanishev, who suffered a humiliating defeat in the latest general elections by the center-right GERB party, was dethroned as Prime Minister last month and has been facing calls to step down as leader of the party as well.

"I am truly saddened to see Stanishev so isolated. It seems that the only partner he has been left with is the Movement for Rights and Freedoms. This is a real tragedy!," Lecheva said, referring to the ethnic Turkish party, which was an ally of the Socialists in the previous cabinet.

Delyan Peevski, son of controversial media mogul and former lottery head Irena Krasteva, entered Bulgaria's parliament after his successful performance in the general elections on July 5 on the ticket of the ethnic Turkish party.

Peevski, 29, was dismissed from the cabinet in May 2007 amidst a large-scale corruption scandal that led also to the suspension of economy minister Rumen Ovcharov.

Although a founding member of the youth wing of ex-king Simeon Saxe-Coburg's NMSP party, he was appointed deputy minister on the quota of the ethnic Turk Movement for Rights and Freedoms, reaching the peak of one of the most dashing careers in recent Bulgarian history.

But he was sacked when the head of Bulgaria's state-owned tobacco monopoly Bulgartabac, Hristo Lachev, accused him of attempting to influence managerial appointments within the company.

Lachev had also accused Peevski of extorting funds from the company, amounting up to BGN 150,000 a month, for "private purposes".

Peevski has been charged with malfeasance in office, but the trial against him was suspended in September.

The scandal, which spelled the end of Ovcharov's and Peevski's tenures with the current cabinet, also took the head of Peevski's former superior, the head of the investigative service Anguel Alexandrov, who was accused of allegedly lobbying for deals with the State Reserve, which was headed by Peevski.