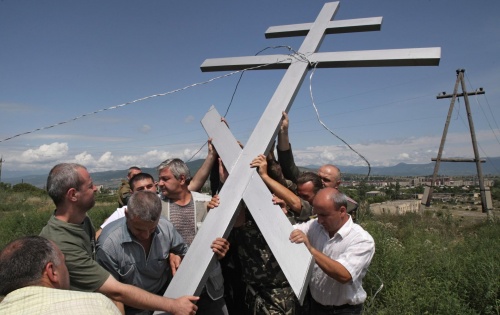 Local South Ossetian people and militiamen install the memorial Cross at the ruined post of Russian peace-keepers, which was the first object attacked by Georgian forces a year ago, outside Tskhinval, the capital of South Ossetia, 07 August 2009. In 2008,

Russia spent almost USD 28 B as a result of its war with Georgia over South Ossetia that started year ago - on August 8, 2008

According to an estimate published by the Moscow newspaper "Vedomosti", the actual five-day war between August 8 and August 14, 2008, cost the Russian budget about USD 2,5 B.

Estimates of the HSBS Bank, however, show that the capital that left Russia because of the war has been about USD 10 B. Russia's gold and currency reserves went down tangibly, and the ruble depreciated by 2%.

In addition, the report points out that Russia had to take over South Ossetia's reconstruction after the war, spending about USD 13 600 per person residing in the Georgian breakaway republic.

The article mentions that Russia lost 64 soldiers, and 160 civilians were killed in the war with Georgia. 4 Russian planes were shot down (6 according to unofficial data).

By adding up all spending and losses, Vedomosti estimates that the war had cost Russia USD 27,7 B so far.

The paper stresses, however, that the spending on South Ossetia is not over as the Deputy Foreign Minister Karasin had requested additional 10 billion rubles for reconstruction; this does not include the money that Russia is going to spend on the construction of Russian military bases in South Ossetia.

After the August 2008 war, South Ossetia and Abkhazia seceded from Georgia, and have been recognized only Russia and Nicaragua ever since.