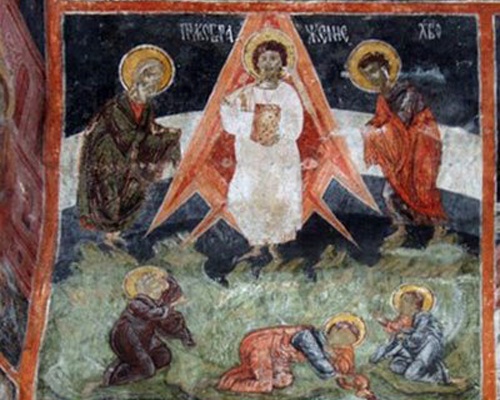 According to the Church, this is the day that Christ strengthened the belief of his disciples in his holy origin by transfiguring himself in front of the eyes of Peter, Jacob and John.

Preobrazhenie starts fifty days of fasting (fish is allowed). On this day people pick the first grapes and give them out to relatives and neighbours. According to folklore beliefs, on Preobrazhenie the "summer turns" and starts approaching the autumn and, respectively, the cold weather.

Othodox Bulgarians also take grapes to church to sanctify it and give them out for health and fertility during the next year. People believe that when God created the grapes, the Devil made the blackberry, called by the people "devil's grapes". The Devil did so that it ripened earlier that the grapes. That is why it is unlucky eats blackberries on Preobrazhenie. The good Christian tastes first the fruit of God and only after that he can eat blackberries without fear.

The Uprising was an organized revolt against the Ottoman Empire prepared and carried out by the Bulgarian Macedonian-Adrianople Revolutionary Committee
The Adrianople vilayet joined the uprising on 19 August 1903 in the Gregorian Calendar, which corresponds to 6 August of the Julian Calendar.