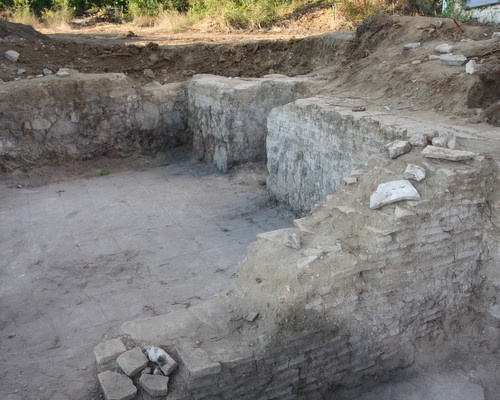 The foundations of what is believed to have been an early Christian basilica have been uncovered at the fortress near Byala. Photo by BGNES

Bulgarian archaeologists have rediscovered a Late Antiquity fortress located near the town of Byala on the St. Atanas Cape on Bulgaria's Black Sea coast.

A team of archaeologists from the Varna Archaelogy Museum led by Prof. Dr. Valeri Yotov started excavating the site of the fortress, which is to the south of Varna, in the middle of July, and within a couple of weeks have managed to reveal a lot of information about it.

The only previously known information about the fortress comes from a note from 1892 of the brothers Hermingild and Karel Skorpil, the founders of Bulgarian archaeology, and a short expedition in the 1970s. Ancient Greek geographer Strabo mentions in his writings of a fortress called Larisa to the south of Odesso (today's Varna) but it is still unclear whether the fortress discovered by the Bulgarian archaeologists is in fact Larisa.

An actual settlement dating back to the Antiquity is believed to be located near the rediscovered fortress but its location is still unknown. Archaeologists have uncovered nearby a anti-landing rampart designed to stave off a potential sea invasion, which is dated back to the Late Antiquity/Early Middle Age.

The main reason the St. Atanas Cape fortress was not studied earlier was the fact that a military base of the Bulgarian Army was located close to it since the spot gives a perfect command of a long stretch of the Black Sea coast and a clear view of a large part of the sea.

The military base was shut down several years ago, and the ardent interest on part of real estate developers towards the area has prompted the Municipality of Byala, and personally the Mayor Anastas Trendafilov to seek the opinion of archaeology specialists about the archaeological value of the spot.

So far the archaeologists led by Professor Yotov have uncovered a relatively well-preserved building which is believed to have been an early Christian basilica located within the fortress.
The excavations near Byala are set to continue.