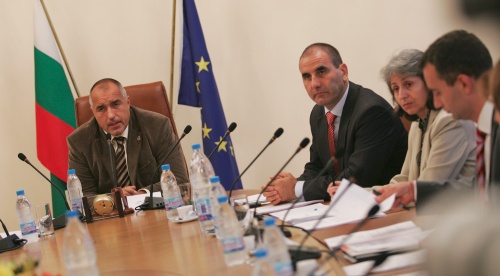 The Bulgarian government approved Wednesday the appointment of Tsvetelin Yovchev as the head of Bulgaria's State National Security Agency. Photo by BGNES

Yovchev's appointment will have to be sealed with a decree of President Parvanov but that is going to be just a formality since he was nominated by Prime Minister Borisov when it was known that Parvanov also favored the nomination.

Thus, Yovchev will replace the outgoing DANS head, Petko Sertov, who is going to be Bulgaria's new Consul in Thessaloniki, Greece.

Earlier on Wednesday, the outgoing DANS speaker Zoya Dimitrova disproved the claims that the intelligence services of Bulgaria's international partners "had lost their trust" in Sertov.

"We worked very actively with out American and European partners. We recently even received a thank-you letter from a certain European intelligence service directly for the DANS Director Sertov", Dimitrova told Nova TV.

The loss of international trust was one of the explanations for the resignation of Sertov and his replacement. Two days before he officially submitted his resignation, the Chair of the Parliamentary Committee to Control DANS, Blue Coalition leader Ivan Kostov, said Sertov had been refused a visit to Washington, DC, because the US authorities had lost their trust in him.

The DANS speaker Dimitrova said Sertov's visit to the USA failed for technical reasons, and admitted that all political forces in the previous Parliament, including the three-way coalition and the opposition had been trying to exert political pressure on the State National Security Agency since it was set up on January 1, 2008.

Bulgaria's ruling GERB party has declared its intention to modify the powers of DANS in order to have the agency focus on counter-intelligence and fighting terrorism, whereas fighting organized crime and high-level corruption would be a prerogative solely of the Interior Ministry.