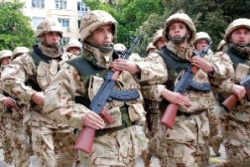 At least 200 Bulgarian soldiers will take part in the international security maintenance operation in Afghanistan which will guard the Kandahar Airport.

With an official ceremony in the North-Eastern city of Shumen on Tuesday Sixth Infantry Company has been seen off.

The mission is expected to be one of the hardest, because of the complicated situation in Afghanista.