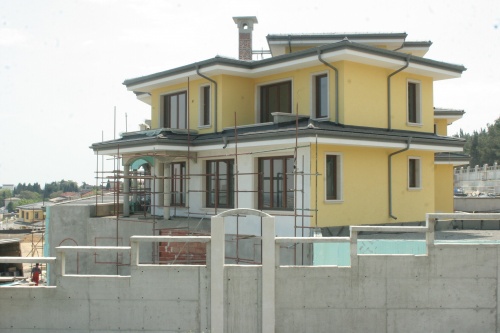 Bulgaria's real estate market has shrunk back to its 2005 levels, according to experts. Photo by BGNES

The number of real estate deals in Bulgaria has declined substantially in the first half of 2009 to the extent that the market is back to the 2005 before it experienced a steep growth.

The number of real estate purchases dropped by 42% for all of Bulgaria, and by 58% for the capital Sofia in the first six months of 2009 compared to the same period of 2008, according to data of the Raiffeisen Real Estate company.

The conclusions of the company are based on official data from the National Statistical Institute, and a survey of real estate firms and entrepreneurs.

The trends that started in the third quarter of 2008 have continued to deepen in the first half of 2009, according to Ani Angelova, Manager of Raiffeisen Real Estate, and CEO of Raiffeisenbank Bulgaria, as quoted by BTA.

Most of the real estate buyers in Bulgaria are in a waiting position expecting a continuing decline of prices, and only the investors with a high-risk profile have remained active on the properties market.

According to Raiffeisen Real Estate, no large-scale property investment deals have taken place in Bulgaria since the beginning of 2009, except for the planned expansion of the large retail chain stores.

The time for selecting properties and negotiating deals has increased from an average of 20 days to an average of 60 days, and almost always involves achieving a substantial discount.