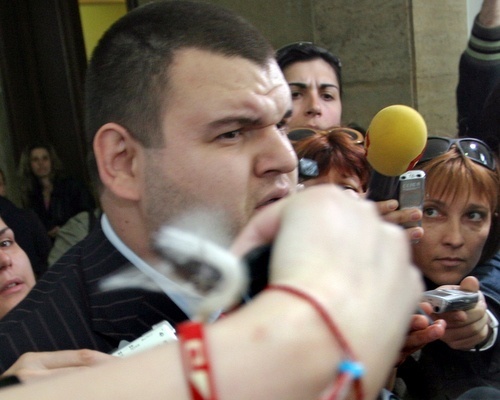 A former Bulgarian deputy minister, who has had one of the most scandalous and corruption-tainted careers in the recent history of the country, will not be member of the parliamentary body for corruption combat, parliament decided.

The nomination of former Deputy Disaster Management Minister Delyan Peevski for member of the parliamentary committee for corruption combat, conflict of interests and parliamentary ethics, was turned down with 156 against 60 votes. One MP abstained.

The rejection drew vehement opposition from the ethnic Turkish Movement for Rights and Freedoms, whose member Peevksi is. In a sign of protest the party refused to nominate another candidate, saying they will not let the majority orchestrate their decisions.

Delyan Peevski, son of controversial media mogul and former lottery head Irena Krasteva, entered Bulgaria's parliament after his successful performance in the general elections on July 5, turning his back on another job offer - that of investigative magistrate.

Peevski was sworn in officially as MP on the ticket of the ethnic Turkish Movement for Rights and Freedoms last Tuesday, just a day before the Supreme Judicial Council released him temporarily from his post at Sofia investigative service.

Should Peevski decide to go back to his work as a magistrate after his term in parliament expires, he can easily do it as under local legislation magistrates' posts are kept if they declare that they are temporarily leaving the system.

Peevski, 29, was dismissed from the cabinet in May 2007 amidst a large-scale corruption scandal that led also to the suspension of economy minister Rumen Ovcharov.

Although a founding member of the youth wing of ex-king Simeon Saxe-Coburg's NMSP party, he was appointed deputy minister on the quota of the ethnic Turk Movement for Rights and Freedoms, reaching the peak of one of the most dashing careers in recent Bulgarian history.

But he was sacked when the head of Bulgaria's state-owned tobacco monopoly Bulgartabac, Hristo Lachev, accused him of attempting to influence managerial appointments within the company.

Lachev had also accused Peevski of extorting funds from the company, amounting up to BGN 150,000 a month, for "private purposes".

Peevski has been charged with malfeasance in office, but the trial against him was suspended in September.

The scandal, which spelled the end of Ovcharov's and Peevski's tenures with the current cabinet, also took the head of Peevski's former superior, the head of the investigative service Anguel Alexandrov, who was accused of allegedly lobbying for deals with the State Reserve, which was headed by Peevski.