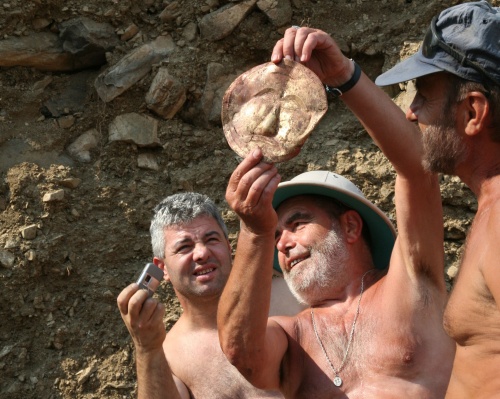 Georgi Kitov who died during excavations at Starosel is pictured here showing the Thracian golden mask that made him world famous. Photo by BGNES

Bulgarian archaeologists are resuming on August 3 the excavation of Thracian temple complex near the village of Starosel in Southern Bulgaria.

The 2500-year-old site - the temple complex of the Thracian ruler Sitalk - was discovered in 2000 by the top Bulgarian archaeologist Georgi Kitov, who died of a heart attack during excavations at the same spot in September 2008.

Now the excavations will be restarted by Ivan Hristov from the National History Museum, who is expected to dig out a lot more artifacts buried at the spot by the ancient Thracians.

The new excavations are funded with BGN 200 000 by the Ministry of Culture. Professor Dimitar Anastasov from the Institute of Mining and Geology in Sofia is also helping with a unique approach to the work.

About 30 000 tourists visit Starosel per year; the continuing excavations are going to last until October aiming to complete the research on the site, and to turn it into a full-fledged tourist spot.