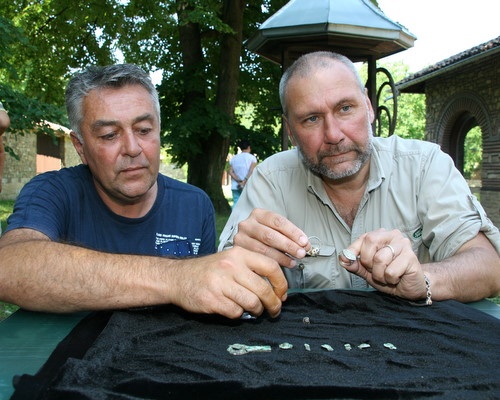 The team of Prof. Nikolay Ovcharov (L) and Dr. Hitko Vachev (R), which is working on the site for second year, has excavated more than 100 precious objects.

Bulgarian archaeologists have found a solid golden ring with an antique Roman gem during excavation of "St.Ivan Rilski" church in the Northern city of Veliko Tarnovo.

The unique 25-gram ring has a fine craftsmanship, and is made of 23-carat gold, Darik radio reported.

On the installed gem, there is an image of what is thought to be the god Jupiter holding a buckler, and a spear.

Another golden ring, with a polished amethyst, has been found in the grave of a princess from the second half of 14th century.

The noblewoman was buried with tinsel clothes interwoven with gold, parts of which had been found during the excavations. The princess wore golden earings, which are being restored by specialists.

A total of five golden artifacts have been found in the last week during the excavations in the Medieval Bulgarian church. It has been proven that the church is part of a monumental monastery complex dating back in the time of the Second Bulgarian Empire (1185-1396).

The team of Prof. Nikolay Ovcharov and Dr. Hitko Vachev, which is working on the site for the second year, has excavated more than 100 precious objects.