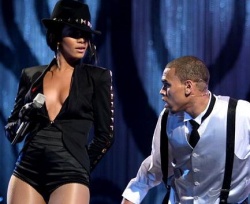 Brown (R) was arrested hours after he fought with his then-girlfriend Rihanna (L) in a rented sports car after a pre-Grammy party in Los Angeles. Photo by thehollywoodgossip.com

US singer Chris Brown has publicly apologised for attacking his ex-girlfriend Rihanna.

In a two-minute video on his website, the R&B star said he "thought it was time that you heard directly from me that I am sorry", the BBC reported.

"I wish I had the chance to live those few moments again", Brown said, adding that he was seeking help, and wanted to live his life as a role model.

Brown pleaded guilty to assault after he was arrested the night before the Grammy awards in February 2008.

"I am very sad and very ashamed of what I have done", he said in the video.

Wearing an orange shirt and apparently reading from a script, he told viewers he has repeatedly apologised to Rihanna.

The 20-year-old called what he did "inexcusable" and asked for forgiveness from his fans.

Brown was arrested hours after he fought with his then-girlfriend Rihanna in a rented sports car after a pre-Grammy party in Los Angeles.

Police records claim he tried to push the 21-year-old singer from the car and repeatedly hit her and choked her.

The pair had been due to perform at the Grammy awards but the appearance was cancelled.

In part of the video Chris Brown talked about growing up in a home where there was domestic violence.

"I saw first hand what uncontrolled rage can do. I have sought and am continuing to seek help to ensure that what occurred in February can never happen again", he said.

Since the attack Chris Brown has lost sponsorship deals, had his songs dropped by radio stations and faced criticism from other artists.

Chris Brown is expected to serve five years' probation and perform six months of community service after he is sentenced next month.