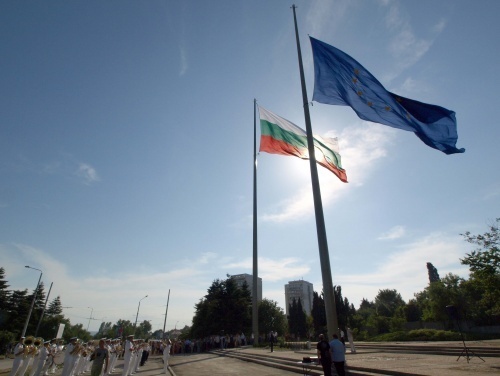 The European Commission is due this week to publish its latest report on how much progress Bulgaria and Romania, which joined the EU simultaneously in 2007, have made in fighting corruption and organised crime. Photo by BGNES

Bulgaria, the European Union's poorest member-state, is at risk of falling under Russian political and economic influence unless Brussels works more effectively with Sofia, according to a panel of EU experts advising the Bulgarian government.

In a report obtained by the Financial Times, the experts called on Bulgaria's authorities to take much firmer action against public corruption, saying high-level officials who are under serious suspicion should be dismissed without waiting for lengthy judicial proceedings.

The panel, set up in November by Bulgaria's former socialist-led government, was asked to recommend ways to help the nation adjust to EU membership and overcome the mistrust in many older, richer EU countries sparked by corruption and organised crime in Bulgaria.

The six-member advisory board was chaired by Dominique de Villepin, a former French prime minister, and included Josep Piqué, a former Spanish foreign minister, and António Vitorino, a former EU commissioner for justice and home affairs.

In their report, prepared before the election victory this month of a new centre-right party known as Gerb (Citizens for the European Development of Bulgaria), the experts said: "Bulgaria should build, according to its national public interest, a European agenda backed by the expertise and the active support of European institutions...

"If Bulgaria fails in the fulfilment of this objective, different consequences could arise. First, the Bulgarian state could become more vulnerable, encouraging populist movements and planting the seeds of discouragement among Bulgarian civil society.

"Second, the efforts undertaken to build up a stronger, more modern and efficient state apparatus could weaken, and so would the trust of the people in the state. Finally, it could undo the ties between the EU and Bulgaria, prompting a shift of Bulgaria towards Russian political and economic interests."

The European Commission stripped Bulgaria of €220m in EU funds in November for failing to tackle corruption, the first time in more than 50 years that such action had been taken against a member-state.

The Commission is due this week to publish its latest report on how much progress Bulgaria and Romania, which joined the EU simultaneously in 2007, have made in fighting corruption and organised crime.

Boyko Borisov, Bulgaria's tough-talking new premier, has vowed to crack down on corruption and imprison anyone involved in embezzlement of EU funds.

The experts' report suggested Bulgaria's competing political forces should draw up a "zero tolerance pact against corruption" as a way of redoubling the state's efforts against the scourge.

It bemoaned the lack of trust between Bulgaria and EU institutions, saying: "Hitherto, the parties involved have neither pursued the same objectives nor shared the same expectations, leading to continuous... misunderstandings."

It added: "A close consideration of Bulgaria's social and political situation leads one to think that there are risks for the nation's stability. It seems important for the EU to acknowledge these risks and avoid any action that could lead to radicalisation."