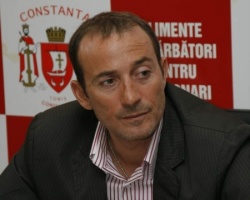 Constanta Mayor Mazare has spurred a scandal by wearing a Nazi uniform. Photo by 1235.ro/admin

The Mayor of the Romanian city of Constanta, Radu Mazare, has spurred a scandal in Bulgaria's northern neighbor by wearing a Nazi uniform to a fashion show on Saturday.

Mazare's act was denounced by various Romanian civil society organizations; the Center for fighting antisemitism has called upon the authorities to start a legal procedure against the Constanta Mayor.

Mazare himself claims that the uniform had no swastikas, and that it was just the uniform of a German infantry general, which had nothing to do with the SS troops.

"I wanted to dress like a general from the Vehrmacht because I have always liked this uniform, and have admired the strict organization of the German army", Mazare said as quoted by BGNES.

The Constanta Mayor is known for his extravagant acts, and has also been investigated for corruption.