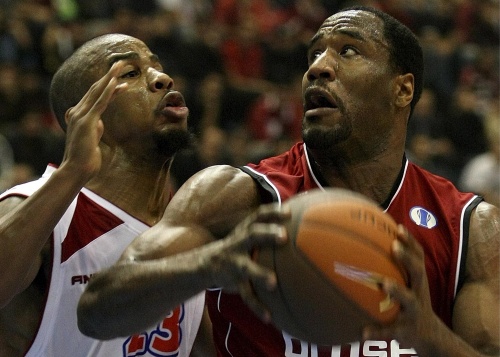 Eric Taylor of Brose Baskets (R) clashes for the ball with Andre Owens of Crvena Zvezda (L), during their Eurocup 2nd round basketball match in Belgrade. Photo by BGNES

Andre Owens and Earl Rowland are expecting to receive their Bulgarian passports in just days while the procedure for their naturalization started in the beginning of 2009.

Per the coach's instructions they are both preparing for the European Championship finals in Poland in September.

According to the Championship rules, Bulgaria has the right to use only one naturalized player so the coach will have to choose between the two and another American professional player, competing with the Bulgarian team - Ibrahim Jaaber. Jaaber is to join the camp on August 1, after missing the NBA summer league over injuries.

Andre Owens was born on October 31, 1980 in Indianapolis, Indiana. A 1,93 m guard, he played competitively at Perry Meridian High School where he was an Indiana All-Star in his senior season. Owens attended Indiana University and then transferred to the University of Houston.

Undrafted, he signed with the Utah Jazz as a free agent prior to the start of the 2005-06 NBA season. He was traded to the Golden State Warriors along with Devin Brown and Keith McLeod in exchange for Derek Fisher on July 12, 2006. In October 2006, he was released by the Warriors without playing in any preseason games.

The Indiana Pacers signed Owens to a one-year deal on July 4, 2007.

Earl Jared Rowland was born on May 18, 1985 in Salinas, California. He is a 1,93 m point guard. Rowland graduated from Saint Mary's College and went on to compete for the Florida Flames and later for the Australian Townsville Crocodiles.

After Australia, Rowland moved to Europe and played in Latvia and Germany. The last season Rolwand competed in Bon for the German Telekom team.