Dutch Journalist Dirk van Harten: Borisov is the Best among the Bad 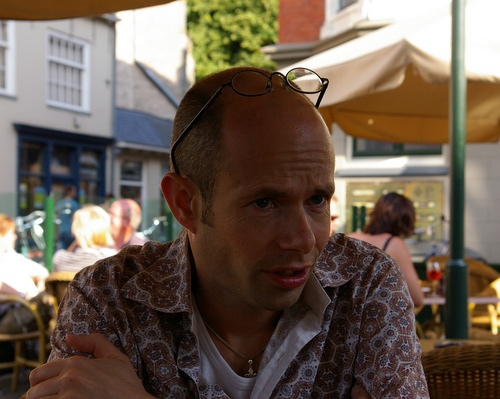 Dirk van Harten is the only Dutch journalist working and living in Bulgaria. Since October 2008, he is a correspondent in Bulgaria for Dutch national newspaper Trouw and press agency ANP. His articles further appear in magazines and on websites. He focuses mainly on political and social issues. Before moving to Bulgaria he worked as a reporter and editor for several newspapers and magazines in the Netherlands. In 2007 he published a book on the functioning of the Dutch civil service. He studied history and journalism at the universities of Amsterdam and Rotterdam.

When and why did you come to Bulgaria? What were your first impressions?

Bulgaria may not be unique, but it is an interesting country. Bulgaria and also Romania and the other Balkan countries are probably the most interesting part of Europe at the moment. I settled down in Bulgaria nine months ago, but before that I had been visiting it for five years on a regular basis, so I knew the country and what was going on.

One of my first impressions, which still amazes me, is that nobody answers their e-mail, including officials and ministries' spokespersons. They just don't reply. When they promise that they will call you back, they never do. Once the official spokesperson of the minister told me he could not answer my questions at the moment, but promised to look into them and give me his answer on the next day. I called back on the next day and his secretary said he was on a holiday for two weeks.

Which are the most frequent topics that you select to cover from Bulgaria and are of interest to your audience?

There is quite a lot of interest in the Netherlands, which is good. In the last months the media have been dealing mainly with the elections and everything connected with them. Social problems, corruption in short the bad things are usually the topics that portray Bulgarian in the Dutch media. I have also been writing about the media and independence of the Bulgaria media, which raises many questions and concerns.

How would you describe the recent general elections in Bulgaria in a nutshell?

Interesting. The run-up to the elections was very strange - the changing of the election law just two months before the vote, which is absolutely idiotic, all the problems that the Blue coalition experienced and the interference of the government, using all the means they have, using bureaucracy and the legal system to oppress their opponents.

This is something that I can not imagine happening in the Netherlands, not on this scale. First of all changing the election law in the Netherlands is very difficult. I am surprised how easy it is to change the law and the constitution in Bulgaria. You can do it in more or less over a day.

Everybody expected Borisov to win, but I think the important thing is not so much that GERB won as that the government lost. It was a no-confidence vote against the ruling coalition.

Do you share the view that the media played an unusually key role in the elections?

There was definitely a lot of media attention, but not always in the right way. The focus was mainly on the scandals with some of the media very clearly supporting one party, while trying to disgrace the others. The focus was not on the issues and there was not much of a debate.

The media in the Netherlands function very differently from the media here as we can work a lot more independently. Certainly all the newspapers, TV channels and radio stations have their political colors and are either more left or right-leaning, but it is important that they won't support one candidate or one party so openly and will always give attention to the opponents as well. Bulgarian journalists are not asking certain questions, they are just reporting without being very critical, while their owners are very much involved in the reporting.

The explanation for these differences lies in the different cultural and historical background of Bulgaria and the Netherlands. Bulgaria has a very young democracy and is burdened by the legacy of the communist times, when the media could not work independently.

GERB, the general elections winner, are loaded down with a lot of expectation. Do you expect Bulgaria to see radical change or some long-delayed reforms?

Unfortunately I have not heard any concrete plans so far - neither during the campaign, nor after their election victory. They tell you what they are going to do, but they don't tell you how they are going to do it. They say they are going to bring Bulgaria back to Europe, but how? These are very populist statements, they say just what everybody wants to hear both at home and abroad. True, there is a lot of skepticism about Borisov expertise abroad, I am skeptic myself but would give him the benefit of the doubt.

It is too early to make predictions about the success of his government, but I am not sure that the minority cabinet that he formed is a very hopeful sign. He has the opportunity to bring in new people, but this is probably not the basis for a stable government. I really do hope that he will succeed in making Bulgaria a more European country and weeding out corruption.

Sign of what is the fact that Bulgarians elected a popular but unpredictable new leader? Do Bulgarians see him as the saviour to rid the land of its plagues?

Not really. My impressions are that only some people hope that he will be the messiah. Most of the people whom I talked to and who said they will vote for GERB tended to be critical about Boyko Borisov as well. They did not hide they knew little about his men, that not everything in his past was clear. Yet they voted for him because he is the best among the bad and this is part of his success. He is also a very charismatic person, he speaks the language of the people, he is a simple guy or at least this is what he pretends to be, he definitely has a lot of more charisma than Stanishev. The main reason for his victory is that the people were so fed up with the ruling coalition that they would vote almost anybody to kick them out.

Do you see analogies of the phenomenon "Boyko Borisov" in other countries? Has the age of the Strong Man arrived?

There is a tendency in Europe to vote for populists. In most of the last parliamentary elections we saw candidates winning not so much thanks to certain issues, but thanks to their personality and the fact that they were against those in power. We have seen this in Bulgaria, we have seen this in Italy with people like Berlusconi and Sarkozy in France. The one who gets the votes is the one who is more charismatic, who looks better on television. There are definitely some analogies to be made, but even though the Age of the Strong Man may have arrived in Russia for example it is too early to call Borisov The Putin of the Balkans.

Some EU member states, including the Netherlands, have already begun pressing Brussels for more sanctions against Bulgaria as well as neighbouring Romania, which also joined in 2007. Do you support this view?

The image of Bulgaria not only in the Netherlands but in most Western European countries is very negative. This is to a large extent thanks to the former government, who did their best to portray Bulgaria as the European Union drain. The government completely ignored Brussels and gave them the middle finger, which is something you simply can not do. Small wonder they did get punished for that.

In the Netherlands Bulgaria is associated mainly with corruption, organized crime and migrants who come to the Netherlands and steal the jobs of the local people there. The Dutch government has been one of the harshest critics of Bulgaria for some time mainly because there is general concern about what is happening. The Netherlands is also a very big financial contributor to the European Union and it is only natural that we want to know what is happening with the money. On business level, the country is a very big investor in Bulgaria and we want to have good relations with Bulgaria and good business climate to work in. I have met many Dutch businessmen working here in the ICT, furniture and real estate sectors and in consultancy firms. Some of them told me that it is possible to do business here even without having to do anything with corruption, others were horrified.

The calls for triggering the safeguard clause against Bulgaria are also tied with political issues in the Netherlands. The latest elections in the Netherlands were won by a right-wing extremist party, which drums support on vows to throw Bulgaria and Romania out of the European Union. Even though this is impossible, the Dutch government decided to talk tough.

Can you describe Bulgaria in a sentence?

Nothing here is what it seems to be.