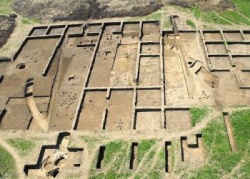 An aerial picture of the Thracian village near the Blatnitsa River. Photo by Bulphoto

Bulgarian archeologists, from the team of Konstantin Gospodinov, discovered new finds during excavations of a Thracian village.

The village is located near the Blatnitsa River in southern Bulgaria, along the future expansion of the Trakya highway.

The village dates from the VI-V century B.C.

The archeologists discovered imprints of what were, most likely, wooden columns making the shape of a 40X24-meter building, surrounded by a ditch.

Broken clay dishes, used as tableware, were found north of the building.

A skeleton, lying on his stomach, was discovered in the ditch, baring traces of hits from some type of cold steel.

The archeologists believe the skeleton ended in the ditch when it was filled up, rather than being buried there.

The discoveries were part of a mandatory checkup conducted at archeological sites before the beginning of construction and road work in their vicinities.