Bulgaria: Still on Russia's Side 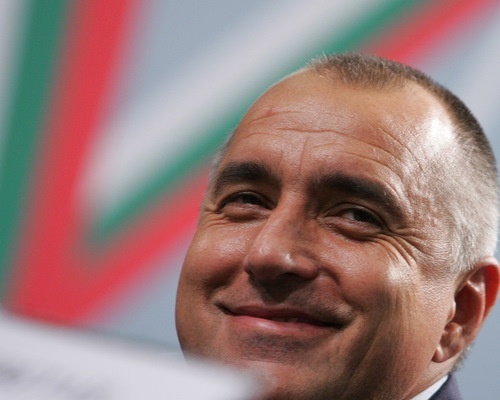 Boyko Borisov, Sofia mayor and GERB leader, is more than happy with his sweeping election victory that secured him 116 MP seats in parliament. Photo by BGNES

Bulgarian Prime Minister Boyko Borisov has requested that the Belene nuclear power plant and South Stream natural gas pipeline projects be temporarily halted. The two projects are being developed in cooperation with Russian state-owned firms Atomstroyexport and Gazprom. This move should not be seen as a signal that Bulgaria's relations with Russia are permanently souring, however.

Bulgaria's newly elected prime minister, Boyko Borisov, in a July 13 letter asked Economy and Energy Minister Petar Dimitrov to freeze temporarily the construction of the Belene nuclear power plant and the development of the South Stream natural gas pipeline project. Borisov claimed in the letter that the Bulgarian state-owned companies involved in the two projects were not taking into account the economic crisis in their operations, hinting at financial malfeasance. Both the Belene nuclear power plant and the South Stream project are being developed in cooperation with Russian state-owned enterprises - Atomstroyexport and Gazprom respectively.

Russian influence in Bulgaria has always been considered robust, and outgoing Bulgarian Prime Minister Sergei Stanishev's government did nothing to dispel that notion, despite Sofia's entry into the EU in 2007 under his leadership and the fact that it has been a member of NATO since 2004. The West saw Bulgaria as a key target for NATO and EU membership, as it would help the West block Russian influence in the rest of the Balkans. From Sofia's perspective, with its traditional ally Russia weakened throughout the 1990s and in early 2000s, there seemed to be no alternative to the Western alliances which promised investment and economic development.

However, Bulgaria's relatively eager participation in the South Stream project - the Russian alternative to the EU's Nabucco project - has been cited as an example of the continuing close collaboration between Moscow and Sofia and proof that Bulgaria is a "Trojan Horse" within the Western alliances - a historically staunch Russian ally that the West was perhaps too eager to envelop.

Borisov's actions to freeze progress on the two major Russian-Bulgarian projects - one of his first moves as prime minister - seem to suggest that he will stick to his campaign promise to play by "EU rules" on energy policy and reverse his opponent's policies of cozying up to Russia. He also campaigned on the idea that he would not be beholden to Moscow and that he would treat Russia just like any other power, thus ending any semblance of a special relationship between Bulgaria and Russia enjoyed under Stanishev's government. The project freeze also resembled a move by Bulgarian President Georgi Parvanov, when he stated in April 2008 that the Bulgarian pipeline network is not an "extension" of Russia's network and that Russia's natural gas company Gazprom should respect Bulgaria's sovereignty.

However, the warm relations between Bulgaria and Russia are not a modern phenomenon, nor are they dependent on any particular government's policies or politician's personal outlook towards Moscow. The relationship is rooted in geopolitics and has withstood the test of time from the 19th century until today.

Bulgaria owes its independence from the Ottoman Empire in the late 19th century to Russia, which fought the Russo-Turkish War with the intent of creating a "Greater Bulgaria" with access to both the Black Sea and the Aegean Sea. The Russian plan for an enlarged Bulgaria, which would have given Russia friendly ports in the Mediterranean, backfired when Western powers alarmed by the prospect intervened, albeit diplomatically, and greatly reduced Bulgaria's territory in the 1878 Berlin Congress.

Russia and Bulgaria continued to have a strong relationship throughout the 20th century, despite Bulgaria's decision to side with the Central Powers in World War I and the Axis in World War II. As an example of its strong link to Moscow, Bulgaria refused to join the attack against the Soviet Union, even though it was allied with Nazi Germany. The subsequent communist period in Bulgaria, while not remembered fondly, does not elicit the same kind of knee-jerk anti-Russian feelings as seen in much of the rest of Central and Eastern Europe. Bulgaria was a loyal member of the Soviet bloc, with no uprisings against Moscow's regional hegemony.

The oft-stated reason for Bulgaria's affinity with Russia is the country's cultural and religious ties, and these certainly work well to grease the wheels of the relationship. However, Bulgaria's interests are rooted in its geopolitical circumstances. Surrounded by entities that have historically been stronger and sometimes outright aggressive toward it - namely Turkey/Ottoman Empire to the South, Romania to the north and Yugoslavia/Serbia to the west - Bulgaria has often relied on Russia to play the role of its protector and champion in the region. Meanwhile, Bulgaria affords Russia a foothold in the Balkans that is much more reliable than the often too independently minded Serbia and Romania, both of which have planned (or are planning) to become regional hegemons. Furthermore, Bulgaria, when overtly allied with Russia, gives Moscow control of essentially the entire non-Turkish controlled Black Sea coastline.

Borisov's initial moves against Russian projects in Bulgaria should therefore not be taken to signal a fundamental shift in Bulgaria's relations with Russia.

Borisov's government may temper some of the overt signs of this strong relationship and recommit Sofia to its Western alliances. However, Borisov's moves to freeze progress on South Stream and the Belene power plant are more likely about rooting out his predecessor's control of those projects than about moving Bulgaria toward a collision course with its historical ally Russia.