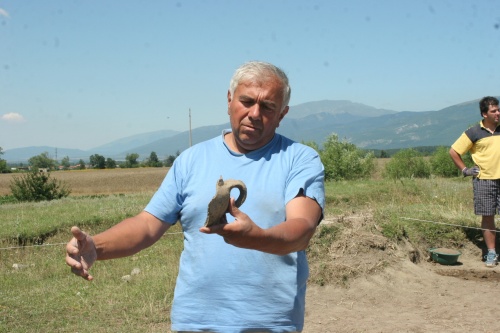 Professor Nikolov shows some of the Bronze Age finds from the site near Kazanluk. Photo by BGNES

A team of Bulgarian archaeologists has uncovered a Bronze Age sanctuary near the village of Kran, close to the town of Kazanlak in Central Bulgaria.

The team led by Professor Vasil Nikolov from the National Archaeology Institute has discovered the sanctuary, which dates back to the 3rd millennium BC; the Bulgarian archaeologists also found a burial urn with remains of child bones.

Professor Nikolov believes that some 6 000 years ago there was a pre-historic settlement near Kran that was built of stone. After the village died off, it was turned into a sacred spot for sacrifice rituals.

He is positive that by the end of the excavation season this summer the site in question would reveal extremely valuable new information about the people who lived there several thousand years ago.