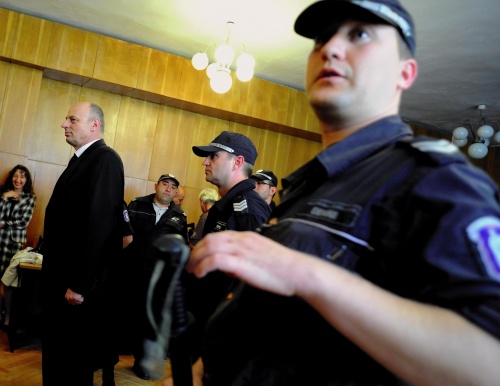 Bulgarian court police is guarding former Kosovo Prime Minister Agim Ceku (L) in the courtroom of the Court of the city of Kyustendil. Photo by BGNES

Serbia accuses Ceku of committing war crimes in 1998-99.
"I have been a factor in many political events, so my possible extradition will worsen a great deal the complicated ethnic relations in Kosovo and eventually complicate the relations between our two countries," Ceku told the magistrates, adding he was not guilty of anything and never in his life committed a crime.

Ceku's defense council told the Kyustendil magistrates that there was not enough proof to show the Serbian Court in Nis that sentenced Ceku to 20 years behind bars was competent to deal with the case.

The attorneys also presented as evidences several documents - a letter from Bulgaria's former Foreign Minister and Member of the Parliament, Solomon Passy, who as Chair of the parliamentary Foreign Policy Commission invites Ceku to visit Bulgaria, documents signed by Kosovo current PM Hakim Taci, showing Ceku is a member of the Kosovo diplomatic team, a UN letter stating that Ceku's case is not within the competency of the Nis Court.