Computer Failure Could Be Cause of DC Metro Crash Killing 9 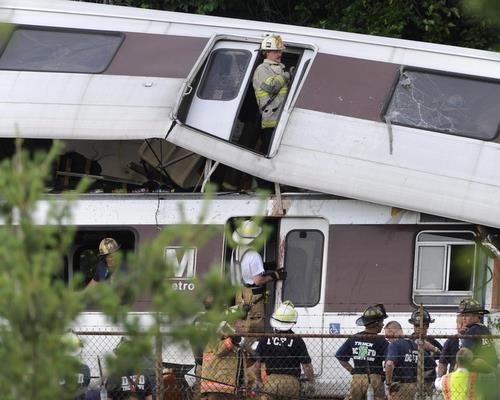 The operator of the DC Metro train that crashed into a stopped train in front of it most likely activated the emergency brakes, the Washington Post reports.

A spokesperson of the National Transportation Safety Board, which is in charge of the investigation said they were not fully certain if the operator used the brakes, but the emergency brake button was depressed, and the steel rails showed evidence that the brakes were engaged.

Investigators also say the trailing train was in automatic mode, which means onboard computers should have controlled its speed and stopped it before it got too close to the stopped train.

Metro sources further stated the first two cars of that train were two months overdue for scheduled maintenance of some braking components.

According to the Post, the initial investigation lists four possible causes of the deadly crash that killed nine and sent scores to DC hospitals: the operator activated the brakes too late; the computers or the train's brakes failed; or some combination of those. Some passengers on the trailing train reported they never felt it slow down.

Service on the Red Line will continue to be disrupted while the investigation proceeds.

The crash, the force of which sent the back train on top of the stopped one occurred on a curve where trains travel at higher speeds.

Metro General Manager John Catoe said there was "no evidence" that the operator was using a cell phone or sending a text message at the time of the crash and "there's not a letter of evidence" to indicate operator error."

The six cars of the killer train were among the oldest in Metro's fleet, purchased between 1974 and 1978. The Metrorail transit system kept the old trains running despite warnings in 2006, the National Transportation Safety Board says.

Metro officials insist replacing the cars would cost almost USD 1 B, money that Metro does not have.

The NTSB also recommended that Metro install data recorders, similar to the black boxes found in airplanes, in all of its cars after a collision between two trains in 2004. Recorders were installed in some of its newest cars, but older ones, such as those of the train causing the accident did not have them, something NTSB deems "unacceptable."

The crash injured more than 70 people.

DC Mayor Adrian Fenty, who on Tuesday downgraded the death toll to seven, confirmed later, at a news conference, that nine were killed, adding he hoped the death toll did not climb any higher.