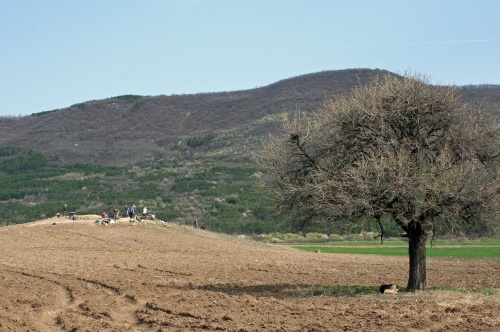 Bulgarian archaeologists are hoping to be able to uncover a newly-found Thracian settlement in its entirety. Photo by BGNES

A team of Bulgarian archaeologists has uncovered a Thracian settlement close to the southeast town of Nova Zagora.

The team of Konstantin Gospodinov and Veselin Ignatov from the city of Burgas hope that their finding would be the first Thracian settlement to be uncovered in its entirety.

The settlement is located along the Blatnitsa River. It had a moat around it, and include large buildings rising above the ground, news.dir.bg reported.

So far the archaeologists have discovered remains of stored grain, weaving looms, pottery including imported ceramics made by the ancient Greeks. They have also found parts of decorations made of bronze, glass, and bones, as well as alloys of gold, silver, and copper.

Among their most precious findings is a silver coin from the nearby Greek coastal town of Apolonia (today's Sozopol) dating back to 5th century BC. The coin is cited an example showing the trade relations between the Thracian-populated interior and the Greek towns along the Black Sea coast.

The Thracian settlement in question existed in the 6th-5th century BC.