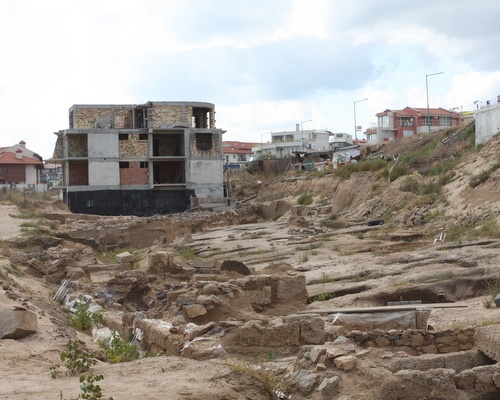 Hotel construction in Bulgaria's Sozopol prevents excavations of ancient sites. This photo shows an excavated part of the Budzhaka area in September 2008. Photo by BGNES

This was announced by Svilen Ovcharov, a Sozopol lawyer specializing in media, copyright, human rights, and environment law, as quoted by BGNES.

According to Ovcharov, the new hotels in the areas around Sozopol known as Bodzhaka, Kalfata, and Harmanite are being constructed on top of an archaeological layer, which is deep from 2 to 7 meters. It contains a number of ancient graves that have not been excavated and researched.

These sites also include the acropolis of the ancient Greek town Apolonia (whose descendant is today's Sozopol). Ovcharov claims that this was the most significant monument of the Classical Antiquity period in Bulgaria, and points out that both the Sozopol Museum, and the National Archaeological Museum in Sofia have ancient ceramics from that site.

According to Ovcharov, Sozopol is headed down the path of nearby Nessebar where absolutely invaluable ancient sites and monuments have been destroyed by overdevelopment and hotel construction.

Ovcharov also states that the protected natural and archaeological sites south of Sozopol had already been destroyed after the Municipal Administration privatized those plots illegally.