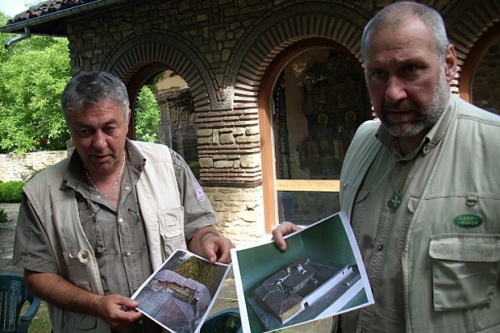 Prof. Ovcharov (right) and Dr. Vachev (left) are doing excavations in a church yard in Veliko Tarnovo. Photo by DarikNews

Bulgarian archaeologists have discovered the silver and gold casing of a medieval book in the yard of the St. Peter and St. Paul church in the city of Veliko Tarnovo.

The book casing is only partially preserved but the archaeological team led by Professor Nikolay Ovcharov and Dr. Hitko Vachev hope to find the rest of it as well as other valuable items during their continuing excavations.

The find is dated back to the end of the 14th century. The piece of casing is about 4 cm wide but it contains a golden image of Archangel Michael with a scepter in his hand.

"This find is extremely valuable as a piece of art, such items are very rare", Professor Ovcharov said.

He also announced his team had discovered a bronze hasp at the same spot which confirmed the testimonies that in the 19th century a secret room with hand-written medieval books was discovered at the church.