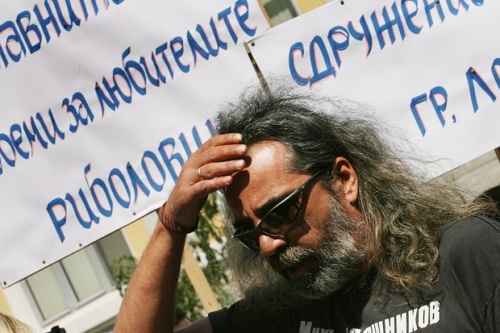 Tens of amateur fishermen are protesting Tuesday in front of the Agriculture Ministry building in downtown Sofia.

The rally was convened over the poor conditions for fishing in Bulgaria and the demonstrators are demanding the State returns to fisherman the possibility to use over 100 dam lakes that have been given to private ownership.

Popular Bulgarian movie and dramatic director, Andrei Slabakov, who is a member of the rally's Initiative Committee, told reporters that the number of those who protest Tuesday was not as important as the fact that fisherman were united around their common requests.

When asked, who exactly he was expecting to come out of the Ministry's building to address the demonstrators, Slabakov said he was prepared to hand the declaration to the janitor because he believed this would be the only Ministry employee, who was not corrupt.

Actor Ivan Laskin, another popular and controversial personality, was also among the rally's participants. He explained the demonstration was organized during the active election campaign because this was the only way for the fishermen demands to be heart, but was adamant the rally did not have any party or ethnic nuances.