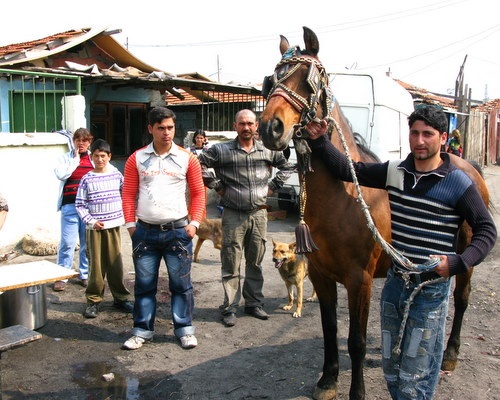 In the Roma neighborhood of the central city of Plovdiv police were looking into complaints by people who claim they were offered 30 leva (EUR15) and a grilled chicken to vote for a certain party. Photo by BGNES

Accusations of vote-buying including three arrests marred Bulgaria's European elections Sunday, while media and rights groups launched an unprecedented campaign against the practice.

Three men were arrested for allegedly offering money or trying to exert pressure on voters to cast their ballots for a particular political party, police said without giving details.

The electoral committee in the southwestern city of Blagoevgrad also announced that it was alerted about "massive vote-buying" in seven villages in the region.

According to national radio, a man was caught allegedly paying voters from his car outside a polling station in the northern city of Lom. Similar cases were also reported in Sofia, Perushtitsa in the south, and Dupnitsa in the west.

In the Roma neighborhood of the central city of Plovdiv police were looking into complaints by people who claim they were offered 30 leva (EUR15) and a grilled chicken to vote for a certain party.

However, the non-governmental organization Transparency without Borders said it saw a drop in fraudulent practices in Sunday's elections compared with previous polls.

The head of the NGO, Antoni Galabov, said they recorded "more cases of pressure than direct payments."

The practice of offering food, money or other gifts to voters, especially from the poor Roma minority, has marred all electoral campaigns in Bulgaria since the fall of communism.

In order to combat the practice, parliament introduced heavy fines and prison terms for all offenders, regardless of whether they were caught selling or buying votes.

In Sunday's elections, Bulgarian parties were also for the first time obliged to stamp all their election banners, slogans and fliers with the caption "Vote- buying constitutes a crime".

The national radio and television meanwhile broadcast hourly calls for people to "vote only according to your conscience" and not "sell" their vote.

A study by the Sofia branch of the Open Society Institute showed that six percent of all Bulgarians were still willing to take money in return for their vote.

Views on BG » Be a reporter: Write and send your article
Tags: elections 2009
Advertisement
Advertisement
Expats.bg All Are Welcome! Join Now!
Related Articles:
More from Views on BG