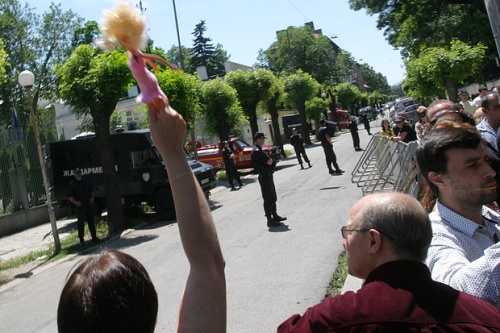 People supporting the Bulgarian father in the custody battle against his Polish spouse demonstrate in front of the building of the Polish Embassy in Sofia Sunday afternoon. Photo by Sofia Photo Agency

About 100 policemen from the special task teams guarded the Embassy. There were several armored trucks with water dispensers at the location, ready to interfere in case of violence.

However, the police did not have to interfere as the protest ended peacefully despite occasional provocations on part of the fans.

The football fans of the "Levski" football club protested in connection with the family saga involving two children with a Bulgarian father and a Polish mother.

Latest information listed the number of demonstrators at 3 000 who moved from the "Levski" football field in the "Gerena" quarter towards the Embassy.

The demonstrators told the Darik radio reporter that they had "verbal" permission from Sofia's City Hall to hold the rally.

The "Levski" football team became Bulgaria's champion for the 26th time earlier Sunday, after a game against "Minior" Pernik.

The horrific drama, that triggered the Sunday protests, took place Wednesday in the town of Asenovgrad when the mother, Polish citizen, Barbara Vasilev, tried to take away her two children - 8-year-old Nikoleta and 7-year-old Pavel from their father.

The parents are separated, but not divorced. The children refused to leave with their mother, which led to the involvement of the local police, court authorities and a representative of the social services in the town.

A fight broke out while the authorities attempted to take the children by force. Pavel managed to escape and his whereabouts are unknown. (Todor told Darik radio that he did not know where his son was.)

In the last two years Pavel and Nikoleta lived with their father in Asenovgrad, after Todor decided to bring them there from Poland. Barbara filed a claim with a Polish Court saying the children were kidnapped. A trial began in Bulgaria for the abduction of the children, under the international Hague Convention. Vasilev was convicted of kidnapping by the Sofia City Court and his appeal was rejected by the higher Court.

An order to immediately return the children to Poland was issued by the Bulgarian authorities on March 13, 2009.