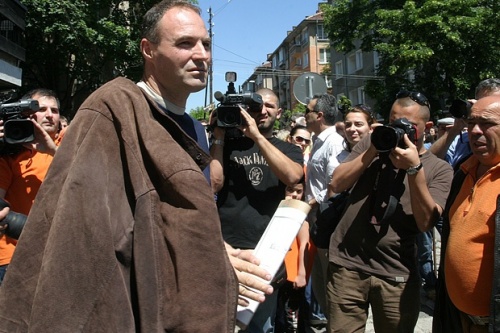 Todor Vasilev is surrounded by supporters Sunday afternoon as they demonstrate in front of the building of the Polish Embassy in Sofia, demanding VasilevвЂ™s daughter is brought back to Bulgaria from Poland. Photo by Sofia Photo Agency

Over 200 people gathered Sunday afternoon at a protest rally in front of the building of the Polish Embassy in Sofia to support Bulgarian father, Todor Vasilev, and his custody battle.

In an official protest letter, submitted to the Embassy, the demonstrators demand that 8-year-old Nikoleta is immediately brought back to Bulgaria.

Vasilev's supporters have already collected 3 000 signatures while an internet petition has collected 6 000.

The protesters declared they were appalled by the actions of the Asenovgrad police and social services when they took Nikoleta away from her father by force on May 28.

The father himself declared he wanted a reversal of the Court order and a new, European trail that would bring the girl back to Bulgaria.

Vasilev said Bulgaria's Justice Minister, Meglena Tacheva, had invited him for a meeting, but he was unable to arrive in Sofia on such short notice. He claims he has written permission from the sibling's Polish mother to travel with them to Bulgaria, but did not produce the document during the rally.

The demonstrators also insisted on the resignation of the Justice Minister, demanded that the Embassy employees come out to talk to them and shouted "We Want Niki Back!"

The horrific drama took place Wednesday in the town of Asenovgrad when the mother, Polish citizen, Barbara Vasilev, tried to take away her two children - 8-year-old Nikoleta and 7-year-old Pavel from their father.

The parents are separated, but not divorced. The children refused to leave with their mother, which led to the involvement of the local police, court authorities and a representative of the social services in the town.

A fight broke out while the authorities attempted to take the children by force. Pavel managed to escape and his whereabouts are unknown. (Todor told Darik radio that he did not know where his son was.)

In the last two years Pavel and Nikoleta lived with their father in Asenovgrad, after Todor decided to bring them there from Poland. Barbara filed a claim with a Polish Court saying the children were kidnapped. A trial began in Bulgaria for the abduction of the children, under the international Hague Convention. Vasilev was convicted of kidnapping by the Sofia City Court and his appeal was rejected by the higher Court.

An order to immediately return the children to Poland was issued by the Bulgarian authorities on March 13, 2009.