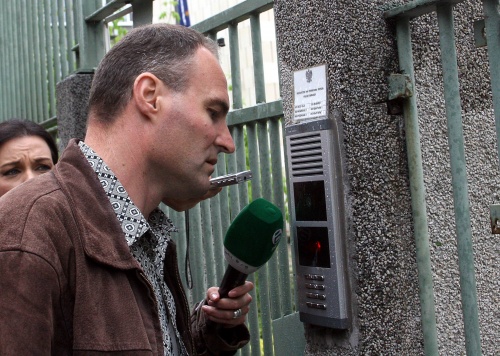 Todor Vasilev, the father of the 8-year-old Nikoleta, was in front of the Polish Embassy in Sofia Friday demanding an explanation. Photo by BGNES

A family drama between a Bulgarian husband, Todor Vasilev, and his Polish wife named Barbara, has led to the involvement of the Bulgarian authorities and foreign diplomats, and a public outrage in Bulgaria.

The story has culminated in the Polish mother seizing her 8-year-old daughter from the Bulgarian father, and taking her to Poland in a questionable way, according to information reported by Darik Radio.

The long-time family drama started about two years ago when Todor Vasilev came back from Poland to his native town of Asenovgrad in Southern Bulgaria bringing his kids, Nikoleta and Pavel, now aged 8 and 7.

Vasilev's wife, however, filed a suit with the Polish authorities that her kids had been abducted. Thus, the case is transferred to the Bulgarian authorities under the international Hague Convention, and after two years Vasilev was eventually sentenced to for kidnapping his own children, who are ordered to be returned back to Poland.

According to Todor Vasilev, the two children did not want to go back to their mother, who had problems with alcohol and drug abuse. Vasilev and his Polish wife live separately but are not divorced.

The mother Barbara with the aid of the local police in Asenovgrad finally attempted to take back her two kids by force.

Her attempt, however, resulted in a fight in which one of the kids, the 7-year-old Pavel managed to escape, and his location is currently unknown.

According to Vasilev, as quoted by Darik Radio, the Polish mother of the 8-year-old Nikoleta has already managed to take her to Poland by plane overnight.

Vasilev claims that this was done illegally as he had the identification documents of both of his kids, and Nikoleta was probably taken to Poland with the help of diplomats from the Polish Embassy in Bulgaria.

The father intends to demand an explanation from the Polish consular representatives in Bulgaria. Earlier on Friday he met with Bulgaria's European Affairs Minister, Gergana Passy.

The Bulgarian authorities including the prosecutor's office and the National Child Protection Agency have initiated an investigation of the case in order to figure out whether or not third persons whose actions could hurt the children or had been dangerous in another way, were also involved in the affair.

Meanwhile, various civil society organizations in Sofia and across Bulgaria have started to organize rallies and petitions in order to protest what they see as an outrageous treatment of Bulgarian kids demonstrated by Nikoleta and Pavel's case.