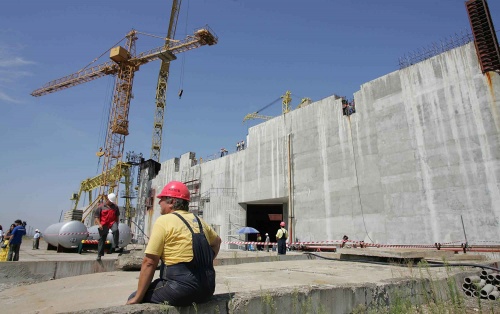 Both political and financial issues are said to threaten the realization of the Belene NPP project which was kicked off in September 2008. Photo by BGNES

The largest threat for the realization of the project for building Bulgaria's second nuclear power plant at Belene are the coming Parliamentary Elections.

This was declared by Boris Pekov, the Chair of the Board of Directors of the state-owned Bulgarian Energy Holding (BEH), as quoted by the Pari Daily.

According to Pekov, the fate of the Belene Nuclear Plant will be decided largely by the outcome of the Bulgarian Parliamentary Elections on July 5, 2009, as some of the opposition parties are fierce opponents of the Belene project in its current form.

Meanwhile, the CEO of Bulgaria's National Electric Company NEK, which is part of BEH and owns 51% of the future nuclear plant, has announced that the German company RWE is looking for partners in order to share to cost for the construction of the Belene Nuclear Power Plant.

According to Papazyan, RWE, which has been selected as the strategic foreign investor with a 49% share at the future plant, has initiated talks with the Russian company INTER RAO and with a Finnish company that has experience with operating Russian nuclear technologies.

RWE and NEK are supposed to finalize the deal for the creation of a joint company to realize the Belene Nuclear Power Plant project by the end July.

Papazyan has pointed out that some EUR 200-250 M would be needed for keeping up the construction work on the Belene Plant until the full funding of some EUR 4 B was provided.

In his words, RWE is aware that the funding had to be secured soon in order to prevent a termination of the construction work, and the German company is willing to commit funds to the project as soon as the joint company with NEK is set up.

The documents for the approval of the project by the anti-monopoly watchdogs of the EU is supposed to be ready within a few weeks, and the approval itself will take four weeks, Papazyan said.

The two experts have admitted that there was practically no bank that would be willing to loan about EUR 3,8 B for the Belene project, and that is why other funding opportunities had to be sought.

According to Pekov, one of the realistic options is for funding Belene was a Russian government loan. At the end of his term as President last year, the present Russian Prime Minister Vladimir Putin promised a loan for Belene even though the Russian side has not presented any conditions for such a loan yet.

Pekov said the respective Bulgarian and Russian Ministries were currently holding talks about a potential loan.

In his words, the other option is Bulgarian intra-government loans including from the Bulgarian Energy Holding but the opportunities for those are not great.

In late October 2006, the Bulgarian National Electric Company approved the offer of the Russian Atomstroyexport, the French Framatome (Areva), and the German Siemens for the construction of the Belene NPP using third-generation VVER-1000/V-446B reactors.

In December 2008, NEK and RWE signed the contract with which the German company was selected as a strategic investor in the Belene Project.

Under the contract, RWE will receive a share of 49% of the Belene plant in exchange for a capital payment of EUR 1,275 B, a premium of EUR 550 for NEK, and a loan of EUR 300 M for the purchase of equipment and other expenditures.

Thus, RWE will be providing more than EUR 2 B, which is more than half of the cost of the project, which is estimated at EUR 4 B.