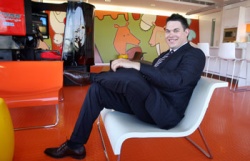 Daniel Tzvetkoff at his Intabill headquarters in Milton last year. Photo by Annette Dew / The Courier-Mail

By James Mccullough
The Courier-Mail, Australia

Barely a year up-and-coming entrepreneur Daniel Tzvetkoff was the Gen Y version of author Tom Wolfe's "Master of the Universe".

For, like Sherman McCoy, Wolfe's central character in his masterful 1987 book about financial high-flyers, Bonfire of the Vanities, Tzvetkoff had everything.

Today, however, the company he majority owns owes about million to online US poker houses.

And if the recent disposal of some of his assets is a guide, he's had a harsh reality check.

He drove a Lamborghini with the number plate "baller", owned a massive boat, chartered impressive jets, opened his own Fortitude Valley nightclub, Zuri, sponsored a V8 supercar racing team - and was busy amassing property and doing interesting side deals.

In between driving the Lambo he got around in a Ferrari 599, an Audi S6, a Range Rover and a Ford GT40. During regular trips to Las Vegas, where he is rumoured to have a house, he was again spotted in a Lambo.

Mr Tzvetkoff is young and good looking. He loves fine champagne and had a penchant for the very high life, although deep down he is a boy from Ipswich with Bulgarian parents.

In some IT sectors he was and still is described as a genius who created an enviable business through his main Australian company Intabill, based in Brisbane's inner-west suburb Milton, of which he owns a two-third's share and is managing director.

In recent times Mr Tzvetkoff's business has come back to earth with a thud. A few weeks back Intabill sacked 96 staff from its Milton head office. At the time Mr Tzvetkoff blamed the global economic crisis and said he was refocusing his company. Barely a dozen staff remain at Milton.

His prized Lamborghini and other flash European cars have now gone. His Hedges Ave mansion is believed to be back on the market.

The Courier-Mail understands Tzvetkoff has been personally contacting potential buyers of the property.

Ray White's salesman Michael Kollosche, who handled the original sale, said he had not received any instructions to resell the property.

"As far as I understand it, he is hoping to finish the renovations and move into the property in the next few months," Mr Kollosche said.

Mr Tzvetkoff told The Courier-Mail on March 17 that the house would be completed in "about three or four weeks" but work on the property now seems to have slowed.

The house, bought for million, had a million mortgage over it through National Australia Bank but was remortgaged in recent months.

An apartment he also owns on Hedges Ave at Mermaid Beach - the Coast's "Millionaire's Row" - went to auction last week but did not sell.

The boat of about 27m is moored at the Gold Coast and up for sale. The latest leased jet has been left on the tarmac at Las Vegas.

"Basically everything is for sale," one Intabill insider revealed last week.

Mr Tzvetkoff and his business partner Mr Sciacca had signed a contract for more than million to buy their office headquarters on the corner of Coronation Drive and Cribb St, Milton, from the Becton Group. But whether that contract will settle is now not certain.

So how could things have turned for the worse for a young man in a hurry with some great ideas, huge piles of cash and a solid group of talented followers?

In its early days Intabill claimed to be one of the world's top 10 online payment processors, enabling more than a million transactions a month between websites, customers and banks. It originally had more than 5000 clients, mostly in Europe and North America, from online gambling and travel websites to airlines and global banks.

About 50 per cent of Intabill's business relates to online gambling, with the balance a fair spread between online ticketing, travel and the like.

Funds were sent to online poker houses often via a processing company or an intermediary - a Salt Lake-based independent company called Impact. Today Intabill owes four of the largest online poker sites in the world about million.

The figure was higher but asset sales and "arrangements" put in place by Intabill and the sites reduced some of the debt.

About million is owed to the largest online poker site, the Isle of Mann domiciled Poker Stars - which operates out of North America, run by the powerful Isai Scheinberg - and Full Tilt Poker, based in Dublin but also run out of the US.

Mr Scheinberg is believed to be worth more than $US1 billion ($A1.28 billion) and his so called poker stars, include the likes of actor Jason Alexander (Seinfield), author and part time poker player Anthony Holden, Brazilian auto racer and team owner Gualter Salles and Darus Suharto, who made the final table of the 2008 World Series of Poker Main Events.

Another million is owed to Absolute Poker and a further million to Golden Palace, a casino and online poker group.

Other insiders blame the loss of customers on increased "charge backs" - or R10s as they are called in the trade - where consumers complain about their credit card or direct debit charges.

It's understood Intabill's charge backs were very low in some areas and reasonably high in others.

Mr Tzvetkoff pointed out that - as experienced already by the likes of GE Money - the cost of funding in wholesale markets has dramatically increased in the present volatile market conditions.

He said this has meant a planned diversification into lending products had been terminated.

"In recent weeks we have come to the realisation that diversifying in these difficult market conditions presents too many risks and challenges," he said.

"Hence we have decided to scale back our operation to focus on our core e-commerce processing platform."

Despite several phone calls and email requests, Mr Tzvetkoff did not respond to The Courier-Mail's request for an interview.