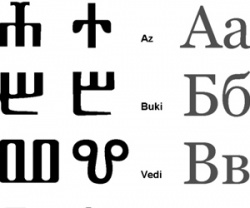 Bulgarian residents will be able to register domain names in Cyrillic by the end of the year, the country's foreign minister vowed.

The goal was described by Foreign Minister Ivaylo Kalfin as part of the state policy, even though the press conference he gave was part of his electioneering as Socialists' top candidate for the European Parliament.

Minister Kalfin explained that Bulgaria has submitted an application for registering domain names in Cyrillic a day before Russia.

"Bulgaria will be visited by the world's top experts in this field on May 26. The Russians are also working very hard as well," the minister pointed out.

The minister spoke on May 24 when Bulgaria celebrates the day of the Bulgarian Education and Culture and Slav Letters and pays tribute to the deed of Sts Cyril and Methodius, the creators of the Cyrillic alphabet.