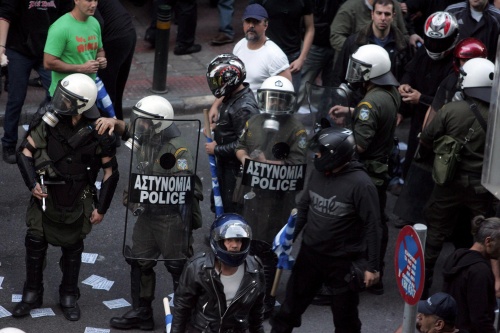 About 1 000 Muslim immigrants protested in the Greek capital Athens Friday against "racism and islamophobia" in a rally which led to clashes with riot police.

The rally has been initiated by the "Destroy Racism" organization and other immigrant and leftist groups. The protesters gathered on the Omonia Square over the way that four Syrian immigrants had been detained during an ID inspection by the police at a Syrian-owned coffee shop.

Reported, one of the Greek policeman took a customer's Koran, tore it up, and stomped it. The police have started an internal investigation.

Friday rally gathered about 1 000 persons mostly between 20 and 30 years of age, from Afghanistan, Bangladesh, Pakistan, Syria, and Somalia, who chanted "Allah is great".

After some of the protesters started to throw various objects at the riot police, the policemen used tear gas to disperse them.