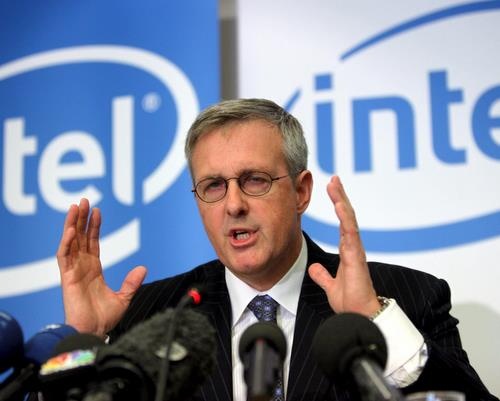 Bruce Sewell senior vice president and general counsel of Intel Corporation gives a news conference in Brussels, Belgium, 13 May 2009 after the European Commission fined Intel Corp. a record EUR 1.06 B for monopoly abuse. Photo by BG

Computer chipmaker Intel has been fined a record EUR 1.06 B by the European Commission for anti-competitive practices.

It dwarfs the EUR 497 M fine levied on Microsoft in 2004 for abusing its dominant market position, the BBC reported.

The Commission found that between 2002 and 2007, Intel had paid manufacturers and a retailer to favour its chips over those of Advanced Micro Devices (AMD).

Intel has announced that it will appeal against the verdict.

"Intel takes exception to this decision. We believe the decision is wrong and ignores the reality of a highly competitive microprocessor market," Intel chief executive Paul Otellini said.

The Commission said that Acer, Dell, HP, Lenovo and NEC had been given hidden rebates if they only used Intel chips. It also found that Media Saturn, which owns Europe's biggest consumer electronics retailer Media Markt, had been given money so that it would only sell computers containing Intel chips.

"Intel has harmed millions of European consumers by deliberately acting to keep competitors out of the market for computer chips for many years," said Competition Commissioner Neelie Kroes.

The Commission has also ordered Intel "to cease the illegal practices immediately to the extent that they are still ongoing".