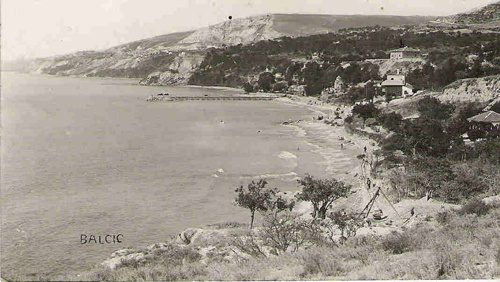 An idyllic scene from pre-war Bulgaria - a postcard of Balchick dated to 1930. Photo by anamnesis.info

From The Amherst Bulletin

A pleasant day in 1942 Bulgaria turned ugly when Rebecca Nachmias returned from an outing with her 4-year-old daughter to find her home occupied by Nazi soldiers. The opulent home had been trashed. One soldier was wiping his boot on the drapes. They told her to go away and not to come back.

Nachmias' granddaughter, local artist Monica Rabinowitz, heard the story at her grandmother's knee - that and idyllic tales of pre-war Bulgaria.

But that day, dazed and confused, without money or belongings, Nachmias began walking the tram tracks in the direction of her husband's thriving paper business. The driver of the next tram to come along on Line #5-Knyazhevo, stopped to help her and the little girl in, waiving the fare.

"And that began her journey of exile," said Rabinowitz, a trek that led through Turkey, a refugee camp in Cyprus, to Palestine and on to the United States.

In the "incubator space" at Hampden Gallery at the University of Massachusetts, Rabinowitz, a teacher of photography at Amherst Regional High School, has recreated the tram ride as well as other stories of her grandmother's life that had mesmerized her as a child. The installation "Line #5 - Knyazhevo" features a constructed environment with sound, video and still photos. "I'd always wanted to create a project around my grandmother's stories," they seemed almost like fairy tales to me."

A conceptual artist who works in traditional and digital photography, sound and installation, Rabinowitz received her B.A. in sociology at the University of Albany in 1990, followed by a stint in London studying art and working as a set designer for theater. In 2002 she received her M.F.A. in visual art at Vermont College.

A visitor to the Hampden installation steps up into the "tram" and takes one of six seats facing ahead to the "windshield," complete with windshield wipers, where a video recreates the view of rolling along the tracks in Bulgaria. Periodically the view dissolves to still photographs that tell Nachmias' story. Rabinowitz' artful photos suggest the simple pleasures her grandmother had enjoyed in Bulgaria - skating on the Danube, dancing.

There is also a photo recreating the sight of the Nazi soldier using the drapes as a boot rag; the room in disarray; a shot of the tram-trudging feet of mother and child; another of them climbing the steps to the tram; a shot in which a cobbler builds a false heel in grandma's shoe to conceal her diamonds in exile, among others.

With friends and family standing in as subjects, Rabinowitz staged the still photos in Amherst and Northampton as well as Sofia, Bulgaria. The video-editing, a new venture for Rabinowitz was learned and accomplished at Amherst Community Television.

A continuous soundscape draws from interviews Rabinowitz conducted with elderly Bulgarian relatives about their experiences during that time. Several voices intone the Law for Defense of the Nation that was instituted during the war, similar to the restrictive Nuremburg Laws passed in Germany: "Jewish children shall not be admitted to an institute of learning...Jews shall not own cars ... Jews shall be barred from places of entertainment."