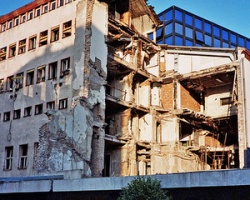 Exactly ten years after NATO bombed the headquarters of the Serbian state radio and television (RTS), the Vienna-based South East Europe Media Organisation (SEEMO) has called for an independent investigation of the attack.

SEEMO, which is an affiliate of the International Press Institute, reminds that on 23 April 1999, 16 media workers aged between 26 and 61 were killed when NATO bombs fell on the headquarters and studios of RTS in central Belgrade.

According to Serbian sources, the media workers who died that day were ordered by the then-management of RTS to remain in the building despite a decision by the government that RTS should evacuate its staff and equipment to another location.

In the first step of an investigation by the authorities in Belgrade, Dragoljub Milanovic, the former director of RTS, was sentenced in 2002 to ten years in prison for failing to protect the lives of the 16 RTS employees killed in the NATO strike.

However, to this day, NATO has failed to ensure full accountability for this unprecedented attack on a media outlet.

"The fact that the Serbian state media was perceived by some as a propaganda tool in the war cannot be used as an argument to justify the bombing of RTS as a legitimate target," SEEMO Secretary General Oliver Vujovic has declared.

In his words, SEEMO urges NATO to admit it was mistaken to target a media outlet, in order to ensure that justice is administered and to finally bring some peace to the families and colleagues of the victims.