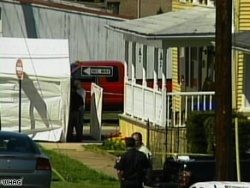 Five people, including three young children, were found dead in this house in Middletown, Maryland. Photo by cnn.com

A father killed his wife and their three young children before fatally shooting himself in a northwest Maryland home, authorities said Saturday.

A relative alerted authorities after discovering the bloody scene around 9 a.m. Saturday.