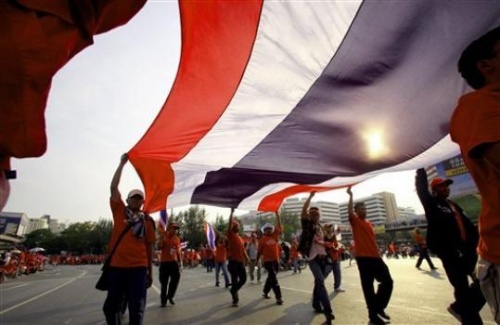 The demonstrators support former Prime Minister, Thaksin Shinawatra, who was ousted in a 2006 coup. Photo by Boston.com

Political protesters in Thailand have forced Saturday the postponement of the Association of South East Asian Nations (ASEAN) summit.

The Thai government has announced a state of emergency in Pattaya where leaders of the ASEAN leaders were due to meet. The emergency order gives police the authority to arrest people without seeking arrest warrants.

The demonstrators support former Prime Minister, Thaksin Shinawatra, who was ousted in a 2006 coup. Thaksin's supporters have been demanding early elections.

Thai Prime Minister, Abhisit Vejjajiva, vowed the ASEAN summit would go ahead. It was called to discuss global financial crisis, and was due to get into full swing on Saturday before concluding on Sunday with a summit due to include India, Australia and New Zealand.