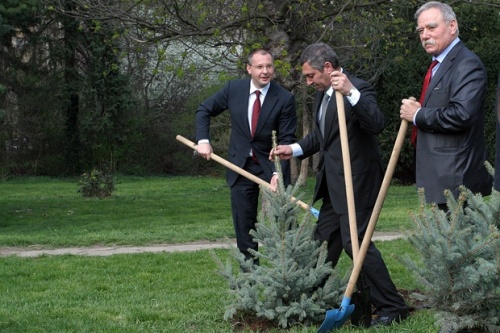 ESA is an international organization with 18 Member States and headquarters in Paris. Its mission is to shape the development of Europe's space capability and ensure that investment in space continues to deliver benefits to the citizens of Europe and the world.

The Prime Minister spoke during an official ceremony dedicated to the 30th anniversary of the first Bulgarian space flight.

The PM, the first Bulgarian astronaut, Georgi Ivanov and foreign astronauts were in Sofia's "Yuzhen Park" (South Park) to plant three silver pines to commemorate the anniversary. The ceremony is part of a series of events to be held between April 9 and 12 under the patronage of Bulgaria's President, Georgi Parvanov and Defense Minister, Nikolay Tsonev, in honor of the space flight's 30th anniversary and 40 years of the establishment of the country's Space Research Institute.

Stanishev said that the Bulgarian space tradition was not only well preserved, but constantly added new perspectives.

With the space flight of General Georgi Ivanov in April 10-12, 1979, Bulgaria ranked 6th in the world among the countries to send an astronaut into space. On its part, in the 40 years of its existence, the Space Research Institute has sent into space over 100 space apparatus and tools and conducted over 300 scientific experiments.