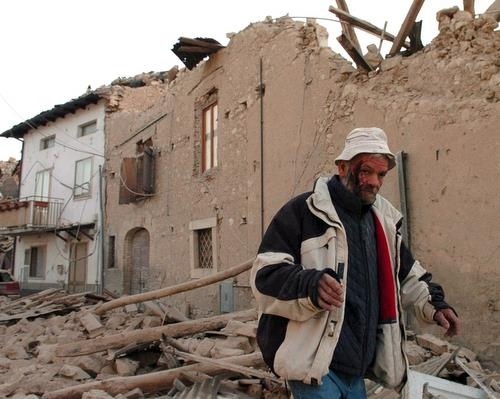 Aftershocks have disrupted rescuers in central Italy as they pick through rubble in their search for survivors of Monday's earthquake that killed 272 people. Photo by BGNES

A strong aftershock rattled central Italy early Thursday as thousands of Italians in the region were still coping in the aftermath of Monday's deadly quake in nearby L'Aquila.

There were no immediate reports of damage or injuries from the latest aftershock.

Aftershocks have heightened anxiety in the area -- including a moderate 5.6 magnitude temblor that struck the area Tuesday, the U.S. Geological Survey said.

A mass state funeral and a national day of mourning are expected to be held on Friday.

A total of 28,000 people have lost their homes in Monday's earthquake, with 17,000 now living in tents and the rest in free hotel rooms or staying with family.