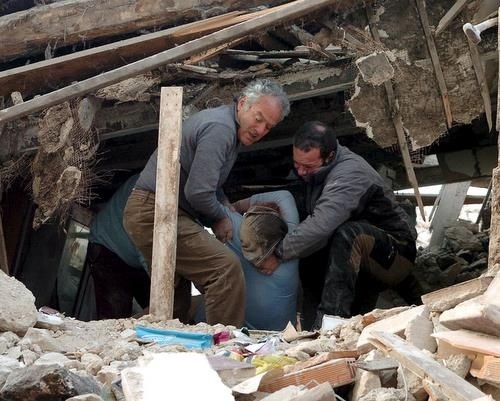 Rescuers are continuing to search for signs of life, a day after a devastating Italian earthquake left at least 150 people dead.

With 1 500 injured and some 50 000 homeless after Monday's pre-dawn quake struck L'Aquila and its region, many survivors spent the night in shelters, the BBC reported Tuesday.

Emergency crews have reportedly pulled 100 people alive from the rubble.

But as dawn broke Tuesday with as many as 250 still thought to be missing, hopes were dimming of finding many more alive.

Survivors spent the night in hotels, cars or a tent city which has been erected in the medieval hill city.

Rescuers were forced to briefly postpone their efforts as the after-shocks dislodged more rubble from buildings.

Driving rain had hampered the night's search in what correspondents are now referring to as a ghost city.

In the village of Onna, with a population 350, the quake killed at least 24 people.

At least 5 000 rescue workers are in the region and hospitals have appealed for help from doctors and nurses throughout Italy.

Between 3 000 and 10 000 buildings are thought to have been damaged in L'Aquila, making the 13th Century city of 70 000 uninhabitable for some time. Parts of many of the ancient churches and castles in and around the city have collapsed.

Italy lies on two fault lines and has been hit by powerful earthquakes in the past, mainly in the south of the country.

Much of the centre of L'Aquila had to be rebuilt after an earthquake in 1703.