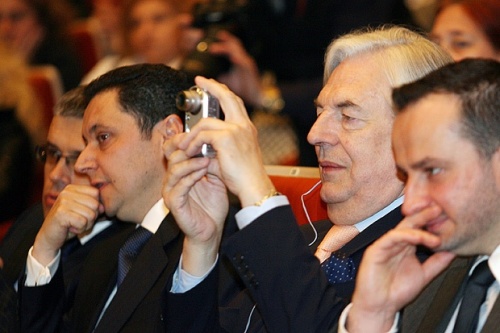 British MEP, Geoffrey Van Orden, (middle) and the leader of the Order, Law and Justice Party, Yane Yanev (L) at the third Congress of the Party, held in Sofia Sunday. Photo by Sofia Photo Agency.

By voting for the Order, Law and Justice Party, the Bulgarian people will send a clear message they want change.

The statement was made Sunday by the former rapporteur for Bulgaria and British Member of the European Parliament (MEP), Geoffrey Van Orden.

Van Orden is an official guest of the third Congress of the Order, Law and Justice Party, which is held in Hall 1 of the National Palace of Culture (NDK) in downtown Sofia.

The forum, including 3,500 Order, Law and Justice delegates and 1,500 delegates from other parties, was opened by the anthems of Bulgaria and the European Union (EU). It is expected that the delegates will nominate the MEPs candidates and elect the party's leadership.

In his address Topolanek, whose Cabinet recently lost a no-confidence vote, states that the leader of Order, Law and Justice Party, Yane Yanev, had won the support of the EU conservative parties, defining Yanev as a true visionary, who offers realistic solutions, knows what is good for Bulgarians and the EU.

Topolanek warns that the observed "renaissance of socialistic thinking," in the light of the global crisis, is becoming a serious problem.

In his address to the delegates, Yanev himself, spoke about the gray economy, the corruption and the huge differences between those in power and the ordinary Bulgarians, stating the tri-party coalition's rule had concentrated the country's capital in less than 5% of its residents.

Yanev pointed out that currently "white collar" crime was more dangerous and wide-spread in Bulgaria than the underworld crimes.

"Actions of high ranking individuals, politicians, ministers, prosecutors, magistrates and others sent over 1 million Bulgarians far away form their motherland," Yanev said, adding Order, Law and Justice was the political force capable of giving people back their confidence and trust.