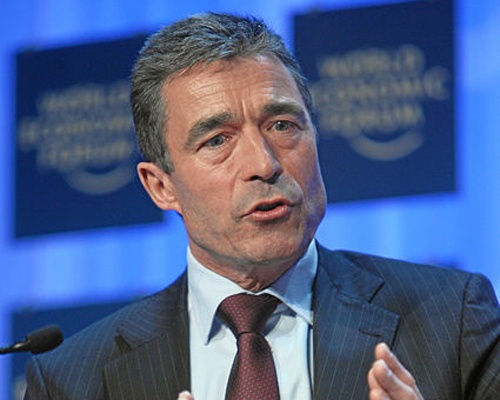 This was announced by Rasmussen himself during a NATO news conference at the Strasbourg - Baden Baden Summit televised live on CNN.

Bulgaria's former Foreign Minister and present Chair of the Parliamentary Foreign Policy Committee, Solomon Passy, was among the major bidders for the NATO Secretary General position.

Rasmussen became the new Secretary General despite initial fierce opposition by Turkey to his selection over his refusal to apologize for the 2006 Mohammad cartoons affair, and the permission that a pro-PKK Kurdish TV station ROJ has to air from Danish soil.

After Rasmussen's initial remarks at the news conference of the NATO Summit, which celebrated the 60th birthday of the North Atlantic Alliance, the outgoing SG Scheffer, the French President Sarkozy, and German Chancellor Merkel all welcomed the Danish Prime Minister at his new job.