60% of Bulgaria Parliament Decisions Void over Lack of Quorum 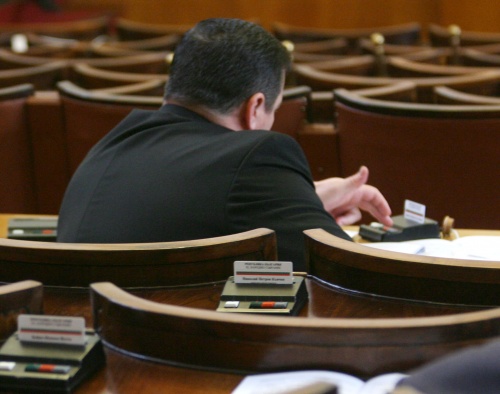 Bulgarian MPs seem to have developed a unique system of voting with several cards in which only a few of them need to be present at sessions. This, however, may lead to legal issues. Photo by Sofia Photo Agency

During its tenth session, Bulgaria's current Parliament has adopted 59,55% of its decisions without the legally required presence of at least 50% of all MPs.

The news was announced Sunday by Lidiya Metodieva, an Associate Professor at Sofia University, who conducted a research as part of the school's project entitled "Civic Control over Parliamentary Activity".

"The taxpayers' money for the new voting system in the plenary hall has been spent in vain because the Parliament continues to adopt laws without the legally required quorum", Metodieva explained.

According to her research, October 30, 2008, set a record because on that day the Parliament made a total of 47 decisions without the required minimum of present MPs.

Metodieva pointed out that Bulgaria's Supreme Constitutional Court considers legal only those texts which had been adopted during a vote with at least half of all Members of Parliament present.

In her words, the situation in which Parliament has passed 60% of its laws and regulations without a quorum creates conditions for attacking these acts before the country's courts, which might force the Parliament to vote on them again.

Recent examples of acts adopted without a quorum include the amendments of the Local Taxes and Fees Act, and the regulation abolishing the penal interest on advanced payment of a consumer credit.

Bulgaria's Parliament is notorious for the endemic absence of most of its members. The few present MPs usually use their absent colleagues' Parliamentary cards to vote instead of them as well. Thus, oftentimes one MP practically submits several votes.